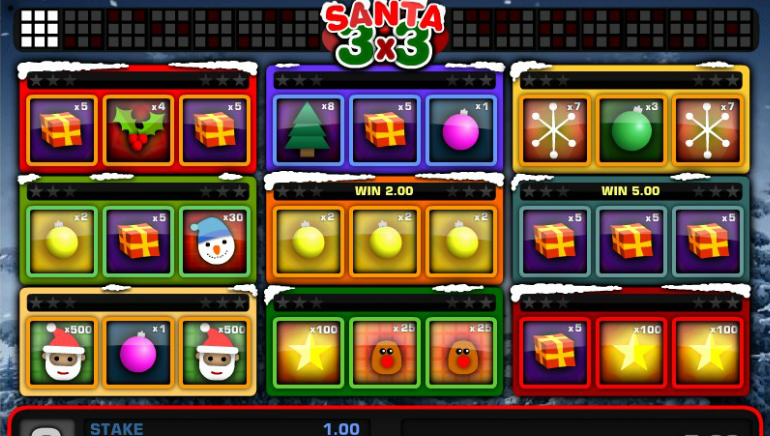 Santa 3x3 is the third 3x3 slot produced by 1x2gaming, and its release comes just in time for the holiday season.

Santa 3x3 comes on the heels of Jackpot 3x3 and Fruity 3x3, previous 1x2gaming releases which garnered a lot of fans due to the fast pace that nine simultaneous slots allow. Santa 3x3 is not only the third in the 3x3 series, but it is also the third Christmas-themed slot game that 1x2gaming has produced; the other two are Yule Be Rich and Gingerbread Joy.

The 3x3 set up of Santa 3x3 allows for fast-paced games and high payouts. The game does not come with the frills that other slot games come with, such as scatters, wilds, and bonus games, but its appeal lies in the ability to play multiple slot games at once. The top row pays little but the bottom row pays a lot, and players can turn off “unlucky” symbols to help them achieve large winnings.

The minimum bet is ￡.01 and the maximum bet is 450, which means that both low and high-rollers can enjoy the game. The return to player percentage is a whopping 98.1, which means that Santa 3x3 is a game that is meant to spread holiday cheer through large amounts of winnings!

1x2gaming is an independent online gaming software developer based in the United Kingdom. The company started out producing Virtual Football products way back in 2002, and today they create a wide variety of games in HTML5 and Flash format. Their portfolio currently consists of almost 100 games, including virtual sports games and slots.

12 Levels of Christmas Offered at bet365

Playtech Gets Into the Holiday Spirit With Christmas Live Casino Tables