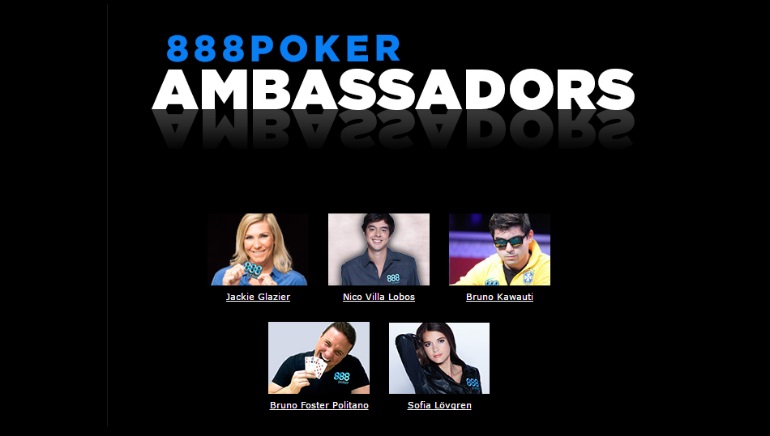 The 888 Poker ambassadors are some of the best online poker players in the world who interact with the online poker room's player community.

Considered one of the world's leading online poker rooms, 888poker is looked upon by many online poker players for its elite team of 888poker Ambassadors.

The current team of ambassadors featured on the 888poker site includes five players: Sofia Lövgren, Bruno "Foster" Politano, Bruno Kawauti, Nico Villa Lobos and Jackie Glazier. These pros wear the 888poker logo in pride as they take part in live and online poker events all around the world, playing for healthy competition and for good causes and charity.

Specifically, the recent addition of Villa Lobos and Politano to the team of 888poker Ambassadors shows the online poker room's expansion into Latin America and more specifically into Brazil where these two professionals hail from.

The community at 888poker is a tight-knit club of friends where players can communicate with each other on forums or via chat, read articles, post blogs, share tips, upload photos and just generally socialize.

The 888poker community is also a place of interaction between the ambassadors and the players. For example, last December saw Sofia Lövgren reporting for a Q&A with players who have had many questions about her career and experiences, how she became a pro and paved her way to become one of the 888poker ambassadors.

888poker players can also find the ambassadors in tourneys: Just this March, Mrs. Lövgren hosted a game where players were invited to play and attempt to bust her. The prize was quite impressive: A $160 satellite ticket to the 888poker Super Whale Tournament.