A Wealth Of Features in Betsoft's New Reels Of Wealth Slot 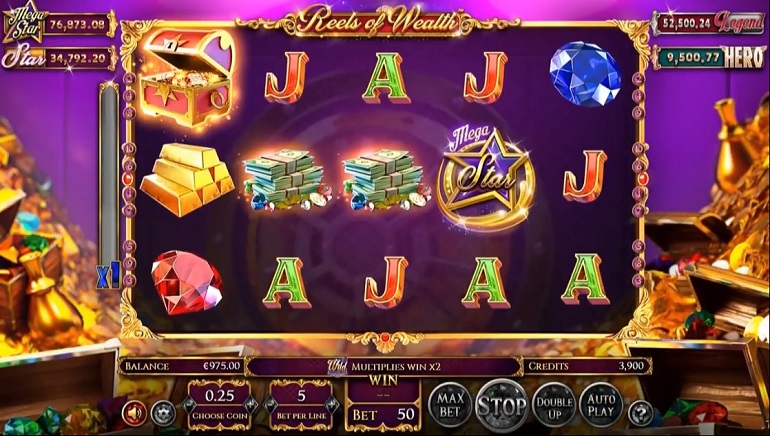 Reels of Wealth is a new slot from Betsoft that comes with colourful symbols and some rewarding bonuses, such as free spins which can lead to four jackpots.

Reels of Wealth is a new slot game from Betsoft that lives up to the name with symbols of jewels, cash and coins across the 5 reels.

It comes with the rewarding Rolling Wins system that can lead to multiple wins for a single bet, along with a new way to collect tokens during the bonus games which can lead to huge progressive jackpots.

There's piles of gold and jewels behind the reels of this colourful game, which has a rich palette of gold and purples to complement the red, green and blue precious stones.

Whenever players land a winning combination across any of the 10 paylines, they are rewarded with a Rolling Win respin of the reels, along with multipliers of up to 3x the base value if new win-lines are formed. Wins created with the help of the wild symbol can be quadrupled in value, and any 4 or more Megastar symbols will launch a special free spins feature.

On The Trail Of Jackpots

Up to 25 free spins are awarded, and these play out on a new set of reels that feature a unique diamond scatter symbol, along with the Hero, Legend, Star and Megastar jackpot icons. These will explode whenever they are seen, which leaves room for new symbols that are collected in a new Trail System and if players land enough tokens of a particular jackpot, they scoop the prize.

Betsoft Comments On Reels Of Wealth

Dan Cooper, head of product development at Betsoft has said, “Our goal with Reels of Wealth was to create an immediately captivating game that also had considerable depth,”

He added that “With re-spins, rolling wins, and a common symbol set, the base game is seriously inviting, with the potential for significant wins.  But the Megastar mode - essentially a game-within-a-game – opens up even more opportunities, with four different jackpots, and a totally unique player journey powered by our in-house ‘Trail System’.”