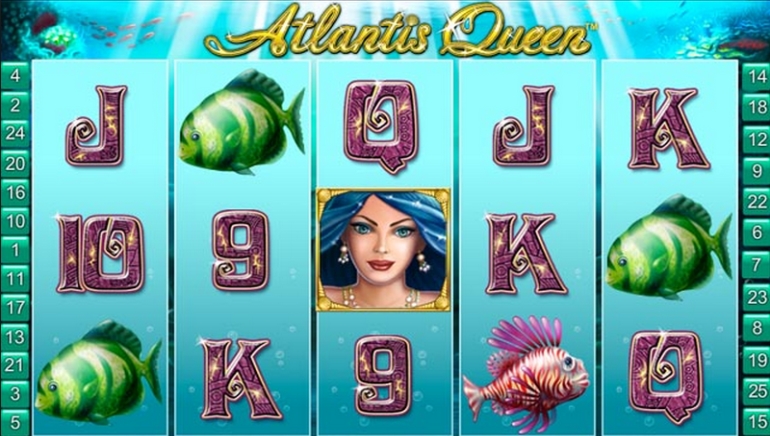 Atlantis Queen is a rewarding slot game themed on the mythical city of Atlantis. Spin the reels and claim generous multipliers from two lucrative bonus rounds.

Atlantis Queen is an immersive slot game that will draw you beneath the surface of the ocean to the shimmering blue depths below – all part of a quest to locate the hidden riches lost in the demise of the legendary city of Atlantis.

Playtech is behind Atlantis Queen, and the presence of this outstanding gaming developer provides real assurance as to the impressive quality of the online slot. There are touches of real quality positioned subtly through the game – like when the golden fish swim past on the Atlantis symbol.

The interface consists of five reels, and there are three symbols on each. All counted, there are 15 symbols displayed when the reels stop spinning. Across those reels there are up to 25 paylines that can be activated. The more you activate, the greater the cost of each spin – it’s that simple. Line bets can be set at a number of values between $0.01 and $50.

Watch out for the mermaid symbol, because when three appear on reels two, three, and four, the slot will trigger the Pearl bonus game. This will result in nine pearls being picked entirely at random and hidden in clams. The value of the winnings will be determined by whether the opened pearls are gold, silver, or bronze.

Three or more of the temple symbol appearing anywhere on the reels will trigger the Atlantis Temple bonus game. And this is where you get to select stones to try and unlock free games, huge multipliers, additional scatter symbols, and extra wild symbols.

bet365 Casino is one of the best casino sites for playing Atlantis Queen, because of their generous casino deposit bonus.