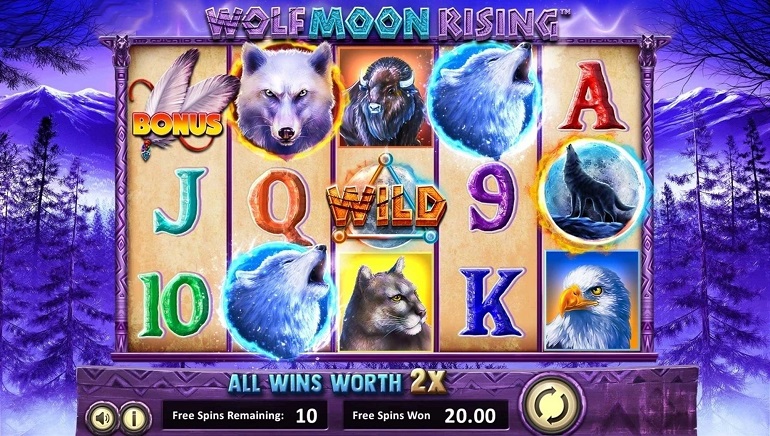 Enter the world of Wolf Moon Rising for the chance to earn double winnings during free spins or win up to 10,000x from the Elemental Wild symbols.

A wild adventure awaits in the latest video slot from BetSoft Gaming. In the Wolf Moon Rising slot, a group of fearsome creatures have been gathered up as the symbols. Alongside the wolf, there’s also an eagle, a wildcat, and a buffalo.

All of the symbols are displayed on a slot interface with five reels and three rows. Meanwhile, compatibility has been put in place on Windows and MacOS for desktop and Android and iOS for mobile devices.

With 25 fixed paylines, Wolf Moon Rising has the potential for a maximum win of 20,196x times the wager in the base game. When making spins, each wager can start from €0.25 at the lowest. After rising through a series of increments, the largest wager can hit €5.00.

BetSoft appears to have designed the wild symbol as one of the strongest in the game. For starters, it’s possible to match up five wilds on the very same payline and trigger a 10,000x payout. At the same time, Elemental Wilds can substitute for missing symbols, aside from Wolf Moon and Feather Talisman symbols.

In the case of the Wolf Moon, these images carry a striking benefit in that they can trigger winnings even if only one appears. Just to clarify, a single Wolf Moon shall deliver winnings to the value of the current wager.

Feather Talisman and Fortune of the Pack

The Feather Talisman can deliver some of the most recognisable special features, considering that three or more symbols shall initiate 12 free spins. During this feature, all wins pay both ways and all winnings shall be doubled in value.

The Double Up Game is an optional extra that players can enter to try and unlock the Fortune of the Pack. Following a standard win, it’s possible to launch the mini game and flip a coin for the chance to win double the winnings.