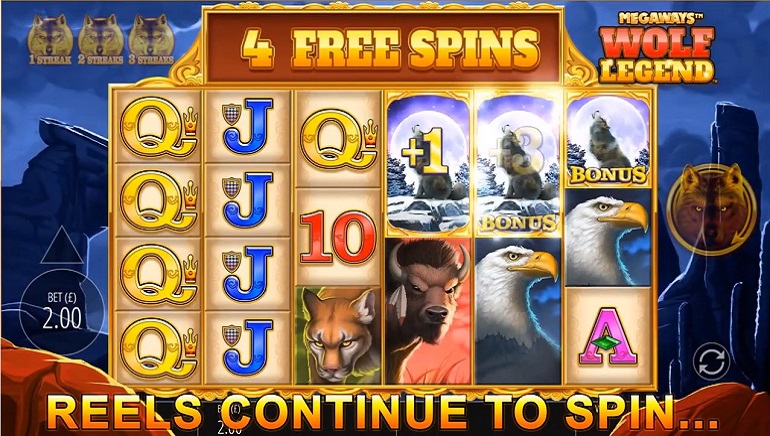 The new game from Blueprint brings up to 117,649 ways to win on every spin, increasing win multiplier in the bonus, as well as the bonus buy feature for those who don't like waiting.

Lately, Blueprint Gaming has been producing many slots based on the licensed BTG Megaways technology. These games have been hugely popular with the players due to their potential to produce huge payouts and Wolf Legend Megaways is the latest addition to this group of games created by Blueprint.

Fun in the Wilderness

Taking players inside rocky mountains in the evening, the Wolf Legend Megaywas features a nice design but manages to maintain a classic feel with symbols such as titular wolves, eagles, buffalo, and other wild animals one would expect to meet in this type of setting. The slot features six reels and up to 117,649 ways to win. The number of win-ways changes with every spin.

There are also mystery symbols, which appear randomly on the reels. When they land, all mystery symbols will turn into the same symbol across the entire board and combine with any other symbols of the same type already on the reels, creating potential for some really big hits.

When it comes to the bonus feature, some of the things are new and some are quite familiar. The bonus is triggered by landing three or more Wolf bonus symbols anywhere on the reels. This triggers the Golden Streak feature, during which players get one, two, or three re-spins, depending on the number of triggering scatters.

On each spin, more free spins can be won, and the streak continues for as long as new spins are added. Once there are no more free spins in the view, one streak is lost. Once they are done with streaks, players can also gamble all of their spins to try and win more streaks and increase the total number of bonus spins.

Once the bonus starts, every win will increase the win multiplier and there is no limit as to how high the multiplier can go. So, there is potential for some really astounding wins in Wolf Legend Mewgaways. It is also worth mentioning that for those who don't like to sit around waiting for the bonus to land, there is also the buy bonus feature, costing 75 times the stake.