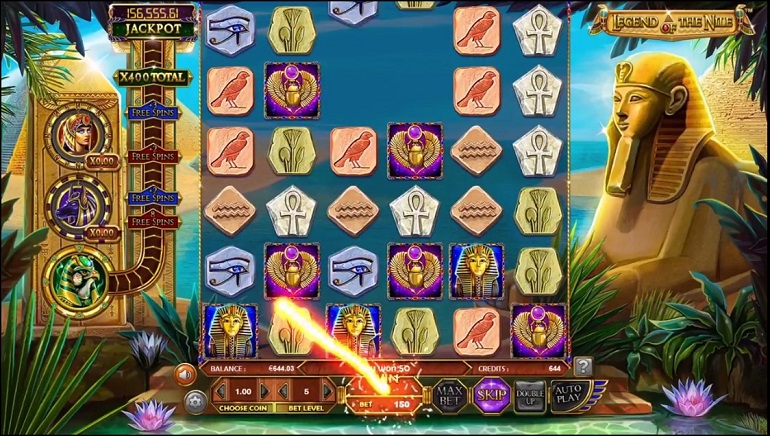 Legend Of The Nile features a 6x6 grid with exploding symbols and several free spins bonus features promising big wins and a lot of excitement.

Betsoft is a casino game developer best known for their 3D slots with interesting features and animated 3D scenes, making their slots feel more like full-fledged PC games. However, with their new Legend Of The Nile Slot, the company decided to step outside of their usual path and try something new.

Like many game developers have done lately, Betsoft produced a slot that is reminiscent of games found on social media platforms, primarily Facebook. With its 6x6 grid, Legend Of The Nile visually resembles titles such as Candy Crush or Farm Heroes saga.

Instead of traditional reels, symbols drop down from the top to create winning clusters of four or more identical symbols. There are no classic paylines, as winnings are paid as long as the cluster is formed, i.e. the symbols are next to each other, regardless of how they are distributed on the grid.

Of course, graphics are Betsoft's strong suit, so Legend Of The Nile is visually attractive and equipped with powerful exploding animations accompanying every win, alongside exciting music to keep players on edge at all times.

Apart from the main slot section, Legend Of The Nile features God Trail, which is in charge of all the bonus features in the game. Every single scatter symbol that lands during the initial spin or any drops following the win will add to the Free Spin trail. Players need to gather at least eight Ra scatters to trigger eight free spins. More scatters will award more spins, while gathering 20 of them will instantly award the progressive jackpot.

Apart from this, the slot has two other features: Anubis Trail and Isis Trail. With every successful winning combo of one of these two symbols, the trail moves forward, until it eventually awards free spins with a special multiplier.

All in all, Legend Of The Nile is an interesting slot similar to quite a few recent titles by other developers but with is own, unique features, which should give players enough reason to give it a go. Give it a spin at Betsoft-powered online casinos.