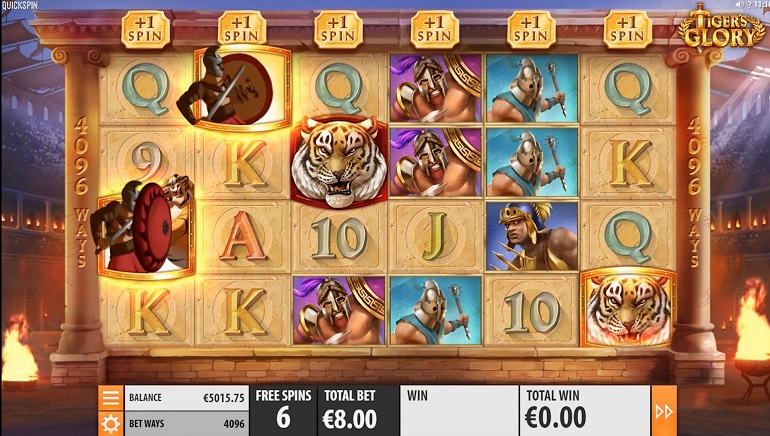 Tiger's Glory is a 6-reel slot from Quickspin that sets the action in the Coliseum of Rome, where gladiators fight tigers in an epic battle. Players can win up to 12,000x their bet during a special Tiger Battle feature.

Quickspin are a Swedish developer that's part of the Playtech group and Tiger's Glory follows on from a number of successful slot releases this year including Eastern Emeralds, Big Bot Crew and Ark of Mystery.

Symbols are in 4 rows across the 6 reels, and with winning combinations formed by matching symbols in any places on reels from left to right, players will have 4,096 ways to collect a prize. The reels are framed in Roman columns and topped off with a stone-effect roof, while the huge Coliseum rises up behind them and a dramatic soundtrack adds to the excitement.

Playing card symbols carved into the reels, will pay the lower value prizes, while 4 brave gladiators risk their lives to bring players some high paying combinations. A snarling tiger is the most valuable symbol, returning 10x the stake when it crosses all 6 reels. A golden wreath of laurels is the wild symbol that can substitute for any of these if needed, although it isn't worth anything on its own.

The wild can't substitute for the bonus symbol, as this triggers the Tiger Battle free spins round when any 3 or more are seen. Up to 20 bonus games are awarded, depending on how many bonus symbols appeared. During these, the Enraged Tiger symbol is added to the mix, paying out in any positions and adding extra free spins when it defeats a gladiator. All Enraged Tiger's also lock in place for any remaining bonus games.

Thumbs Up For Tiger's Glory

Tiger's Glory will be available to play at Quickspin online and mobile casinos from 13th November, from just 0.20 per spin.

Commenting on their latest release, Quickspin CEO, Daniel Lindberg, said: “We are delighted to unveil our latest slot, Tiger’s Glory. Its immersive setting and pulsating gameplay make it one of our most engaging titles to date. With an exciting and rewarding free spins mode, players must battle their way to big victories in the arena of the greats!”