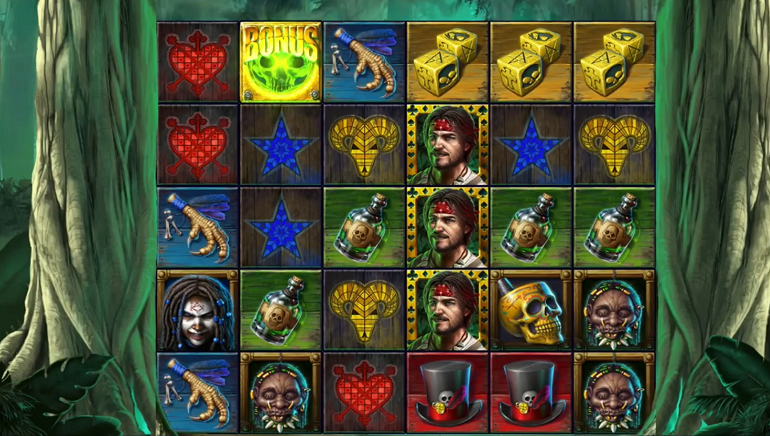 Voodoo Gold is a feature-filled new slot from ELK Studios where players will discover magical symbols and unique bonus features.

A mysterious shamen leads players to a series of thrilling bonuses in the mobile-optimised Voodoo Gold slot from ELK Studios. Set deep in the swamps of Louisiana, Voodoo Gold follows an adventurer through the mangroves, where he finds mysterious symbols such as top hats, chicken feet, and shrunken heads.

Players shouldn't fear such haunting objects though, as Voodoo Gold also has some powerful magic, such as tumbling reels, expanding reels, giant symbols, and free games.

A Land of Black Magic

The detailed graphics of Voodoo Gold set the reels within a dark, misty forest. Lower paying symbols include a skull, star, and heart, each on a painted wood-effect backing. A blues-style soundtrack perfectly matches the Southern setting.

A basic 6-reel, 4-row format gives players 4,096 different ways to win. Any symbols in a winning combination will vanish, triggering an Avalanche feature. New symbols drop from above to fill the gaps, while an extra row is added to the game.

If new wins are seen, the process repeats, creating up to a maximum of 8 rows, crossed by 262,144 ways to win. The number of rows resets to 4 on a non-winning avalanche.

Symbols can fill a single spot on the reels, or appear in 2x2, 3x3, or even 4x4 blocks. Any spaces beneath will transform into wild symbols which help to create extra winning patterns.

Random bomb blasts will clear extra spaces on the reels, triggering avalanches which can lead to further wins and expanded reels.

Instead of free spins, the Voodoo Gold slot machine awards free drops. Between 6 and 15 extra avalanches play out, during which wild symbols stick in place. Players will also find that the number of rows only goes up, never down throughout the free drops feature.

Bet options of this high volatility slot range from 0.20 to 100.00 per spin. It's launched on 8th October at online and mobile casinos that use the ELK Studios range.