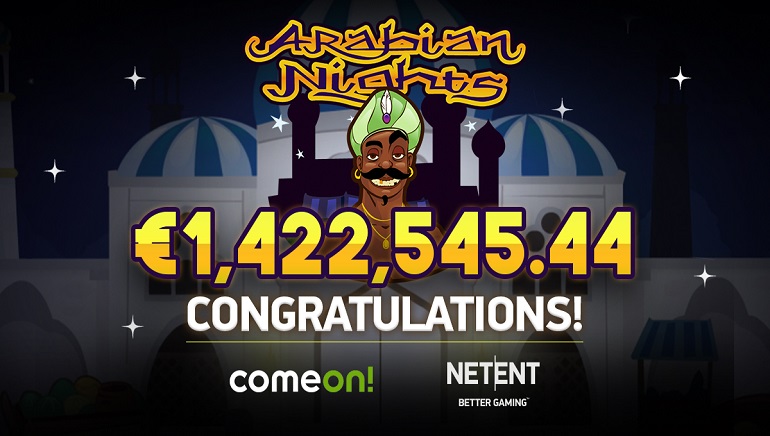 Lucky Swedish player landed the elusive combo of five Aladin symbols on a payline during the free spins bonus, instantly claiming the progressive jackpot of over €1.4 million.

While it may not be as popular as some of the other progressive slots by NetEnt, the Arabian Nights video slot has created its fair share of millionaires over the years. The latest in this series is a lucky player from Sweden who turned his €10 bet at Hajper Casino into a €1,422,545 jackpot after landing the elusive combo of five Aladin wild symbols in the free spins mode.

One of the Oldest Progressives Around

Based on the motifs from the famous One Thousand and One Nights collection of stories, Arabian Nights is one of the longest-standing video slots to feature a progressive jackpot. Developed by NetEnt, one of the leading game suppliers around, the slot has been going strong since 2005, awarding countless jackpots over the span of almost 15 years.

Interestingly enough, titles with a later release date such as Hall of Goods and Mega Fortune, have taken over in terms of popularity as players chasing big jackpots seems to prefer them over Arabian Nights. However, there are still those who stick to NetEnt's early gem when chancing their luck.

Launched in 2005, the Arabian Nights slot is fairly simple in terms of its graphics and sound effects. The game doesn't feature flashy animations or high resolution imagery that players have grown accustomed to in the recent years. However, due to its interesting theme, nice symbolism, and, of course, attractive jackpot, it still remains quite popular.

To win the progressive jackpot, players need to bet the maximum and line up five Aladin symbols on one of the paylines during the free spins mode. This is exactly what the latest lucky player from Sweden did and he picked up just the right moment for it as one of his spins landed the elusive combo, granting him the €1.4 million jackpot.

Bryn Upton, NetEnt Director of Games, extended his congratulations to the lucky winner and expressed his satisfaction with the fact that the game continues to create instant millionaires so many years after its initial launch.