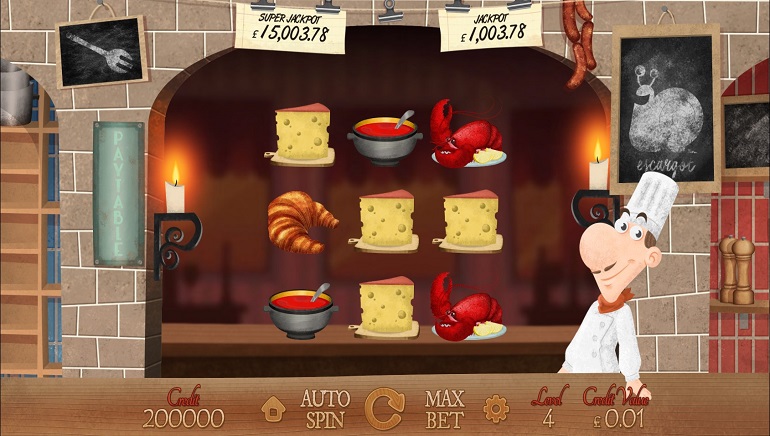 Le Chef is a new slot game from Danish developer Magnet Gaming, that sets the reels in the kitchen of a busy restaurant and serves up tasty treats like pick a prize side games, re-spins and a chance to become a food critic to claim a jackpot prize.

Dishing Out The Details Of Le Chef

It's a cartoon-style slot game with 9 single-symbol reels in a 3x3 grid pattern, where symbols of croissants, cheese, chickens and soup tumble down to form winning combinations. A cheerful chef is in charge of the kitchen and he turns up in several of the bonus features that can make this game such a rewarding one to get your teeth into.

Filling Up On Bonus Rounds

These bonuses include the simple Pick a Dish round, where players uncover a win that they can keep, or try again for a bigger prize, plus there's the Bon Appetit feature, where a busy waiter runs around the tables collecting extra credits for the satisfied customers.

In the Food Critic round, dishes are awarded stars or sad emoji's, with enough good reviews earning some big prizes, while the action moves back to the chef in the Kitchen Time game, with re-spins and instant rewards available.

Progressing through these bonuses can lead to Jackpot or Super Jackpot prizes, in this well-done slot game that has all the ingredients needed to become a big success and can be played on desktop and mobile platforms.

The Head of Gaming Licensing at Magnet Gaming, Thomas Nielson has said ''Le Chef serves up the French restaurant experience to players and if you can impress Paris's toughest food critics, there are plenty of delicious prizes to be gobbled up.''

''We are sure this game will appeal to those foodies out there, and we think they'll be chomping at the bit to get their teeth into the food-filled bonus rounds that it has to offer.''