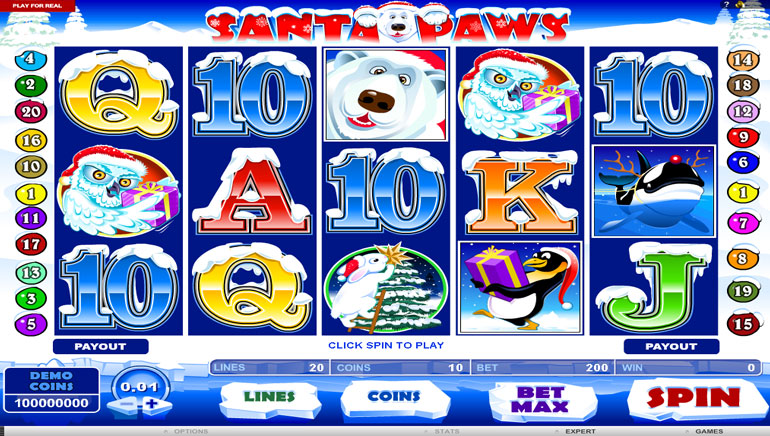 At Golden Riviera mobile casino, players can celebrate the Christmas season with a new game called Santa Paws. Santa Paws is a Christmas-themed mobile game that features friendly animals and a snowy environment that is designed to get players into the holiday spirit.

This game has 5 reels and 20 paylines with a number of additional features. These features include a mystery multiplier that can range from 2 times to 7 times. You also have a chance to win additional prizes in the game including a free spins round. Additionally, the jackpot for Santa Paws during the standard game is 20,000 coins and during the free spins round players can win up to 140,000 coins. Max Stern, spokesperson and casino manager of Golden Riviera said that Santa Paws is a festive and fun game which is perfect for the month of December but can be played at any time of the year.

Santa Paws is the latest game to be added to Golden Riviera, but there are plenty of other games available for play. There are over 30 mobile games that can be enjoyed at Golden Riviera Casino which are powered by Microgaming. Microgaming is a well-known gaming software provider that specializes in online and mobile gaming.

Golden Riviera caters to players in a number of different countries. Because the player base is international, customer support is available in several different languages to accommodate all players. Customer support can be contacted 24 hours a day, 7 days a week through toll free telephone number, email or live chat. For players’ safety, this mobile casino has been reviewed and approved by eCOGRA. In addition, all of the banking transactions are secured so personal and financial information cannot be accessed by unauthorized parties.

€2.41bn To Be Paid Out In Spanish Christmas Lottery