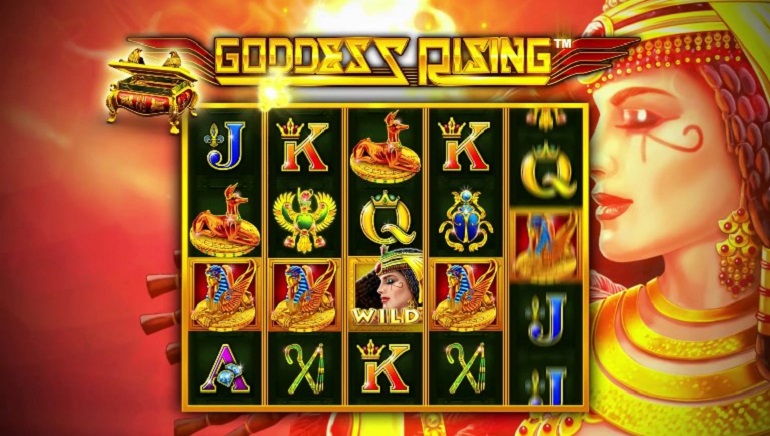 Goddess Rising is a new slot from Novomatic that follows the classic ancient Egyptian theme. Players will find a series of bonuses within the reels.

Novomatic are one of the foremost developers of slots for online and mobile casinos, and the subject of ancient Egypt is one of the most popular with players. So, their new Goddess Rising slot game, which features Isis, along with other classic images of the time, is sure to be a huge success.

Goddess Rising is a 5-reel, 40-line slot that showcases symbols across 4 rows. It's fully optimised for desktop and mobile devices and comes with a high return to player percentage.

Take A Trip Back In Time

Isis was one of the most important Goddesses and she's portrayed as a beautiful woman in this slot game. Joining Isis on the reels are symbols of scarab beetles, a crook and staff, hieroglyphs and golden stautes of other Gods.

It makes the Goddess Rising slot game an impressive sight. A symbol of the Sphinx is worth up to 160x the line stake when it's seen across all 5 reels.

Bonus Features From The Goddess

The Goddess Isis is a wild symbol, who can substitute for others if needed. Although she only appears on the middle 3 reels, she is an expanding wild symbol, which makes her task of completing combinations much easier.

Goddess Rising also has a free spins feature that's triggered by the golden scatter symbol. Although 12 free games are initially awarded, Isis wild symbols will add extra spins on to the total, along with upgraded high-value symbols.

The Goddess can also launch a progressive jackpot round. This is a pick-and-win feature where players select a series of gems. If they match 3 gems, the corresponding progressive prize is paid out. It could be the Mini, Minor, Major, or Grand jackpots.

Goddess Rising is a high volatility slot that's now available to play at casinos which feature the Novomatic range.