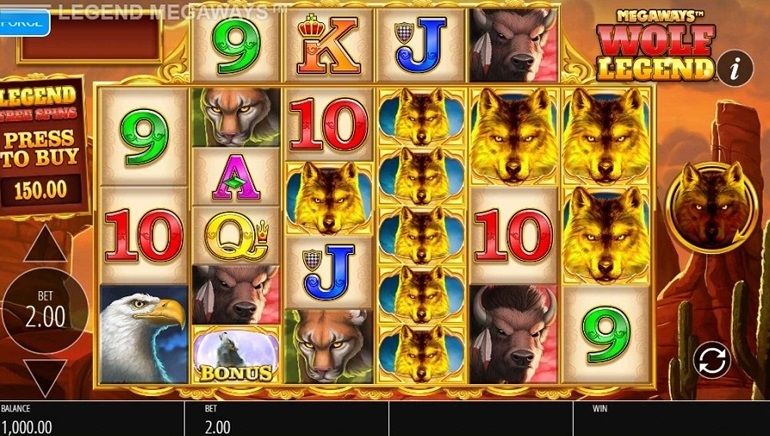 Wolf Legend Megaways is a new slot from Blueprint Gaming that's packed with bonus features and has up to 117,649 ways to win across the reels.

Wolf Legend Megaways is a new slot from Blueprint Gaming that gives players up to 117,649 ways to win across 6 reels. The game is themed around American wildlife and features bison, cougars and eagles alongside the wolf symbols. Free spins, cascading reels, win multipliers and respins await players in this Western landscape.

The Megaways system is used under license from Big Time Gaming. It sees up to 7 symbols on each reel, boosting the number of winning ways as each reel grows.

Wolf Legend Megaways is packed with extra features. Each winning combination vanishes from the reels, allowing new symbol to drop into the empty spaces and potentially creating new wins.

A wild wolf helps out by substituting for others if it can then complete a sequence across the reels. Mystery symbols can appear in a frame, transforming into more examples of a random symbol to boost the chances of a win.

Look Out For A Howling Wolf

A Golden Streak feature is triggered by 3 or more howling wolf scatter symbols. The reels respin and carry on spinning if more scatters appear. These lock in place and once no more appear, or the reels are filed with scatters, a free spins round begins. The number of free games depends on how many scatters were seen.

During the round, win multipliers increase with each symbol cascade, with no upper limit. Players can also gamble with free spins, to win more games.

Wolf Legend Megaways can be played on desktop PC or mobiles from just 0.10 per spin. Commenting on the new game, Jo Purvis, Director of Marketing and Relationships at Blueprint Gaming, said: “The hunt is on in our latest release Wolf Legend Megaways, where it will be the players howling for joy should they win big in this mouth-watering game.''

“With so many ways to win, along with the chance to earn extra free spins, players have every chance to take on the fearsome wolf and come out victorious.”