Prepare to do Battle with Divine Showdown by Play’n GO 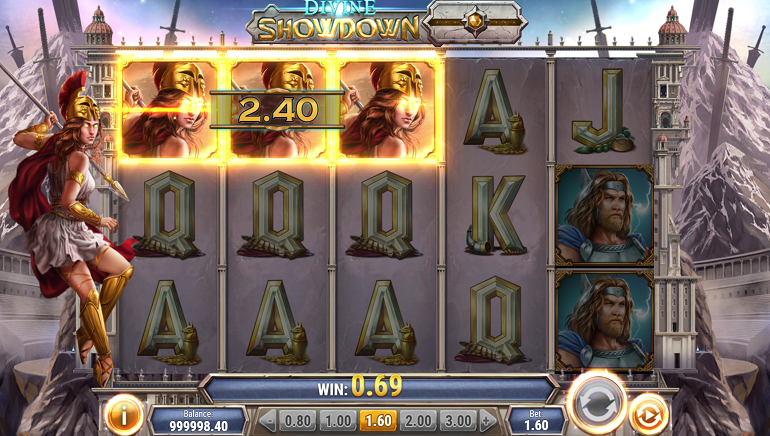 Divine Showdown by Play’n GO is a battle royale for slots fans. Prepare for the greatest conquest of all as the Gods deliver pulse-pounding entertainment with Bonus Spins Battle Rounds, Power Spins, and mystical game play. Which God will be victorious?

The Power Spins are uniquely entertaining, since any God’s Power can be activated. Each of these gods brings unique features to the reels including Wild substitutions, synchronized reels, and more. When players land symbols, Bonus Spins are triggered. At this stage of the game, players simply need to choose a God to do battle. Each God comes with 3 lives. An interactive Battle Reel controls the action for you. The Divine Showdown takes place between the Gods, and the God bearing the most symbols wins the battle.

The Scatter symbol is represented by the crest and the Wild symbol is represented by the God’s Sword forged in fire. The high-paying symbols in the game include Thor, Athena, Anubis, and Wukong. The low-paying symbols in the game include 10, Jack, Queen, King, and Ace. Players begin by selecting their bet size from a wide range of options on the pay table, starting at 0.20 all the way up to 100 currency unit per bet. By depressing the green circular arrows button, the reels get fired up in a frenzy of larger-than-life entertainment. Divine Showdown also features auto play functionality where players can enjoy between 10 and 100 spins at pre-set bets.