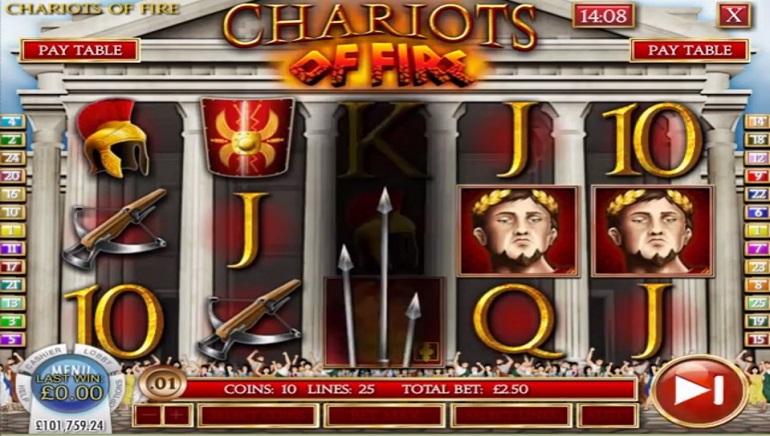 Chariots of Fire features expanding wilds in the base game and exciting bonus features where the first and third reel can become fully wild, creating a huge winning potential.

Slots with a historical background generally tend to be well accepted by the players. Relying on this tendency, Rival Gaming has come up with Chariots of Fire, a slot that revives the spirit of the ancient Roman Empire and their mighty legions that spread fear across the entire known world.

One of the most cherished traditions of ancient Rome was the Triumph, a festive occasion celebrating great generals on their return home after successful military campaigns. As it befits an empire that relied primarily on its military power, these occasions lasted for days and involved rich parades, gladiator fights, and chariot races.

Drawing back on these traditions, Rival's Chariots of Fire is set on the backdrop of a monumental Roman building, with its sturdy stone pillars, and symbols like Roman soldiers, shields, the Emperor adorned with a laurel wreath, a noble lady, white war horse, and an SPQR insignia (wild).

Solemn music playing in the background adds to the overall atmosphere, setting up the mood for the occasion.

Landing three or more Roman soldier symbols on the reels will initiate eight free spins, during which all wins are multiplied by two, and the third reel becomes wild and remains wild for the duration of the free spins.

Big winning chances come from the second feature, Roman Victory, which is initiated by three or more Super Solider symbols landing on the reels during free spins. During the Roman Victory feature, the first reel will become wild as well, basically guaranteeing at least a decent win.

If you feel like revisiting the past and reliving the glorious moments of the Roman Empire, you can find Chariots of Fire featured at a number of online casinos powered by Rival, like Vegas Crest Casino and SlotsMillion Casino.