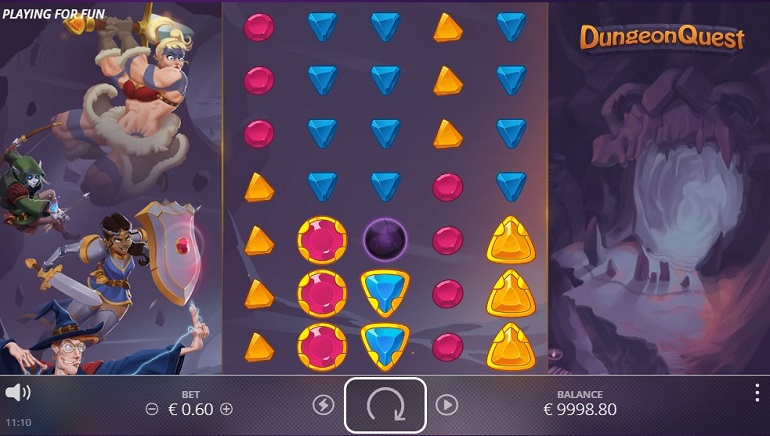 Dungeon Quest from NoLimit City is an adventure-themed slot that includes straightforward features, including 2 randomly-triggered base game features plus a free spins bonus round.

Dungeon Quest from NoLimit City is a 5x7 slot that features 4 fantastical characters searching for gemstones in dark, underground mines. There are scatters, wilds, 2 randomly-triggered base-game features, a bonus free spins round, and a maximum win of 2900x your bet per spin. Time to start digging!

Dungeon Quest is a 5-reel, 29-payline slot that’s playable on all devices. Bets range from £.20- £100 per spin and there’s a maximum payout of 2,900x your bet. While the RTP is standard at 96.27%, the game is fairly high-variance, which means it can be hard to trigger that sought-after bonus feature.

The slot background features 4 awesome characters who are searching for treasure: An Elf, Sorcerer, Knight, and Viking. The reel symbols themselves, however, are pretty boring, and include gemstones of various shapes and colors and corresponding ore symbols, which are lower-paying used to create the gems. There are also wilds and scatters, the latter of which trigger the game’s bonus feature, Alchemy Spins.

Wins are scored when 3 matching symbols land on consecutive reels along a payline, and wins go both ways. When 5 gemstones or wilds land on a payline, you win 100 coins.

The Power Stone feature is triggered randomly during the base game when a rock hits the reels and turns a 2x2 area wild. Additionally, one of the ore symbols is randomly chosen to turn into a wild as well.

The Gem Force feature is also triggered randomly; during this feature, one of the ore symbols is randomly chosen to replace all other ore symbols on the reels. After that, the selected symbol transforms into the ore’s matching gemstone so you can score bigger wins.

This bonus feature is triggered when 3 or more scatters land on the reels. You’ll win 4 Alchemy Spins, and on each spin, one ore symbol will turn wild and remain sticky until the feature is over.

Dungeon Quest is an adventure-themed slot that's a little light on adventure. Still, if you like straightforward games with plenty of features and a high maximum payout, Dungeon Quest is a good option. You can check it out at NoLimit City casinos, both online and on mobile.