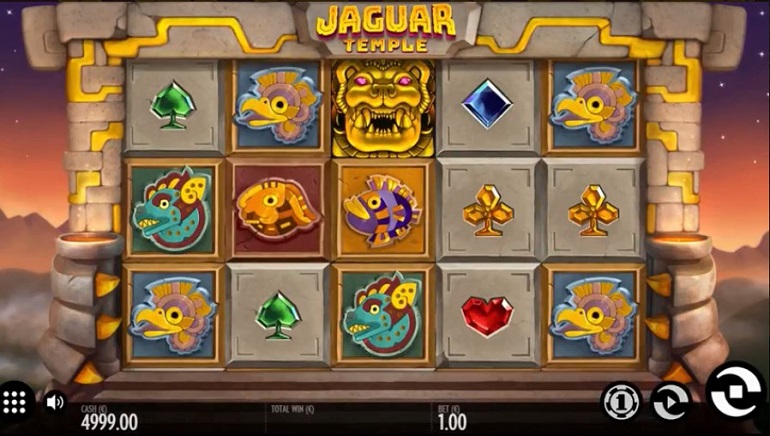 Jaguar Temple from Thunderkick features a high-paying jaguar symbol, expanding wilds, plus a Free Spins Bonus Game that can be retriggered.

For such a fierce animal, the new Jaguar Temple slot from Thunderkick is pretty tame. It's based on ancient Incan culture, in which the jaguar was considered a prominent deity. While the game does include expanding wilds and free spins, it's a mellow slot overall. The good news is, you can win up to 2,045x your bet on a single spin, so if you bet big, there’s potential for a big payout.

Jaguar Temple is a 5-reel, 20-payline slot, designed in HTML5 so it can be played on all devices. Bets range from .$10 to $100 and the RTP is 96.1%. The reels spin inside a stone temple and the soundtrack makes you feel as if you’re in the middle of an ancient ritual.

Lower-paying symbols include hearts, diamonds, clubs, and spades, while higher paying symbols include Incan-style animals, including a jaguar. The jaguar is the highest paying symbol and it appears in both regular size and in 3x3. If 5 or more jaguar symbols land on the reels, you win 50x your bet. The scatter is an Incan-style relic while a warrior that serves as the wild symbol; it only appears on reels 2, 3, and 4, and during the bonus game it can expand.

When 3 or more scatters land on the reels, the Free Spins Bonus Feature is triggered. Depending on how many scatters landed, you’ll win 10, 15 or 20 free spins. During this feature, the 3x3 jaguar symbol appears more often than in the base game and the wild expands, increasing your chances for winning combinations. The Free Spins feature can be retriggered once, for a maximum of 40 free spins.

Jaguar Temple is a fairly straightforward slot that has the potential for some big wins, if you’re willing to bet big. If not, you can still enjoy the Free Spins Bonus Feature, which is where the main action is. While it would have been nice to see multipliers, you can still win a maximum of 2,045x your bet on a single spin, which makes it a slot that may be worth your while. Jaguar Temple can be played at Thunderkick casinos, online and on mobile.