Slot Review: Reel Talent by Just For The Win 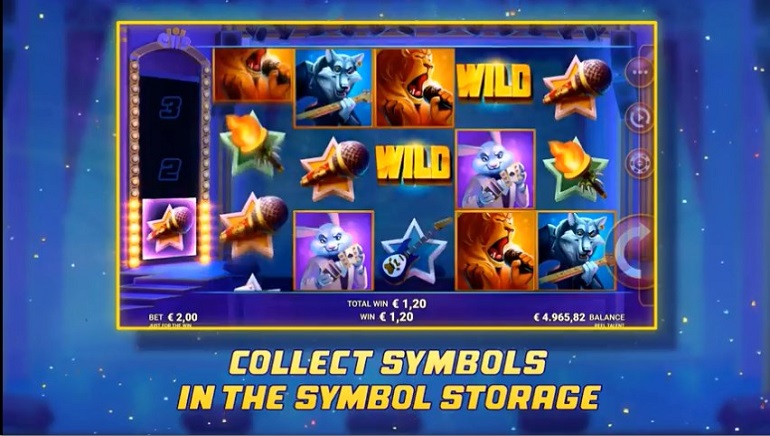 Reel Talent is the latest slot from Just For The Win (JFTW) and Microgaming. It includes bright, vivid graphics, wilds, respins, and a Superspin bonus feature, making it an all-around fun game with some big winning opportunities.

Reel Talent is one of the latest slots from Just For The Win (JFTW) and Microgaming, and while the premise of the slot is a talent show for animals, it’s also a showcase for the talent of JFTW. The game features bright, vivid graphics, wilds, respins, and a Superspin bonus feature, making it an all-around entertaining game that includes the possibility of big wins.

Symbols include a deck of cards, guitar, torch, microphone, and 4 competing acts: A fire-breathing alligator, a rabbit magician, a singing lion, and a wolf guitarist. There’s also a Reel Talent logo symbols and wild to look out for as well.

When a winning combination is hit, the symbol is moved into Symbol Storage, a meter with three slots on the left-hand side. Every time a symbol gets moved to the meter, you get a respin. When the meter gets filled in three consecutive respins or with three separate winning paylines in one or two spins, you get a Superspin.

If the meter isn’t filled in consecutive respins or in one or two separate winning spins, the meter empties out and you have to start again.

There are three types of Superspins, and the one you get depends on which symbols were in the meter.

Each Superspin includes only the symbols that were in the meter, which means that the higher the stage, the higher your chances of winning. In fact, the Stage 3 Superspin offers a guaranteed win.

While Reel Talent doesn’t contain an enormous number of features, those that it does offer are pretty cool. Wilds, a Storage Meter, respins, and Superspins - combined with stunning visuals and a matching soundtrack - make this game one that's worth trying out. You can check out the talent yourself at Microgaming online casinos, online or on mobile.