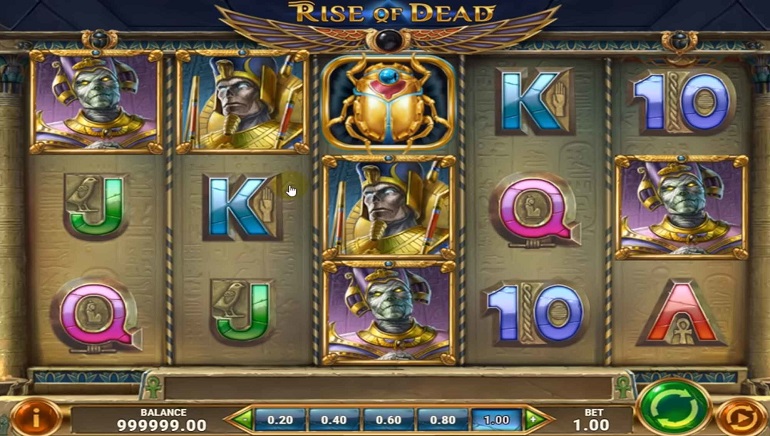 With 20 paylines across, a potential to pay up to 5,000x the stake, and the entertaining Ancient Free Spins feature, the new Rise of Dead slot takes players on another adventure through ancient Egypt.

Play'n GO takes the players to yet another adventure through ancient Egypt with their latest release, the 20-payline Rise of Dead slot. With modern graphics and tense music, the game offers several exciting features and harnesses the potential to pay up to 5,000 times the stake.

The Rise of Dead slot features symbols one would expect from an Egyptian-themed game. There are golden scarabs (wilds), golden ankh tablets (bonus-triggering scatters), as well as several characters representing ancient pharaohs. The full line of wild symbols pays 125 times the stake. The golden pharaoh is the second-best symbol, paying 25x for the full line.

In the base game, the slot has two main features. The Mega Stacks feature is active on every spin and it adds the stack of 12 randomly selected symbols to each reel. The Gift of Gods feature triggers randomly at a start of a spin and it fills reels 1, 3, and 5 with the same symbol, while the reels 2 and 4 continue spinning. When activated, this feature significantly increases chances of a decent win.

The main bonus feature in Rise of Dead is triggered by landing three scatter symbols. This triggers a round of 12 free spins and each scatter landing on the reels during the bonus adds more free spins (2, 4, and 10). The number of free spins players can win in a bonus isn't limited, so the feature definitely has some nice potential.

During the bonus, all regular symbols as well as wild scarabs appear stacked on the reels. Premium pharaoh symbols aren't stacked but will expand every time they can form winning lines by expanding, whether by coordinating with the same symbols or with the wilds.

Although Rise of Dead has many similarities with another Play'n GO title, the Golden King slot, this game still provides enough new graphical elements to make it worth a try. With the RTP of 96.53% and a nice win potential, it may not be a revolutionary game, but it will likely appeal to quite a few players out there, especially those who like titles covering this particular theme.