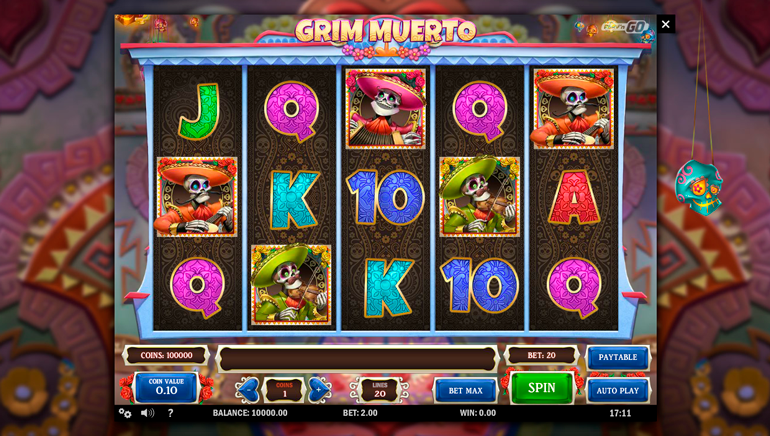 So many different game developers out there and so many slots that often seem eerily familiar. These games may not be copies, but they'll trigger your memory.

For most of us enjoying online slots, hearing about a new title being released is usually very exciting. We look forward to new storylines, fresh graphics, and some new bonus features to keep us entertained.

Lately, however, it seems like there is a tendency among slot developers to create games that look eerily similar to some of the titles we’ve already seen in the past. We’re not talking just about the themes here, but the whole setup – from the appearance to gameplay and in-game features.

In this article, we’ll look into some of the examples confirming this theory and also try to figure out what’s the reasoning behind it. Of course, it is impossible to give a definitive answer without someone from one of these companies coming out and offering an explanation, but we’re all allowed to have at least an opinion on the topic as the end consumers of these products.

Norse Gods on the Reels: Thunderstruck II vs. Asgard

Norse mythology is a fairly popular modern-day subject so it is no surprise there are also quite a few slots featuring Vikings and their gods like Thor, Loki, and others. We can’t pinpoint exactly when the trend started in the online gambling industry, but it is fairly safe to say that Microgaming’s Thunderstruck and more popular Thunderstruck II were probably one of the first such slots. 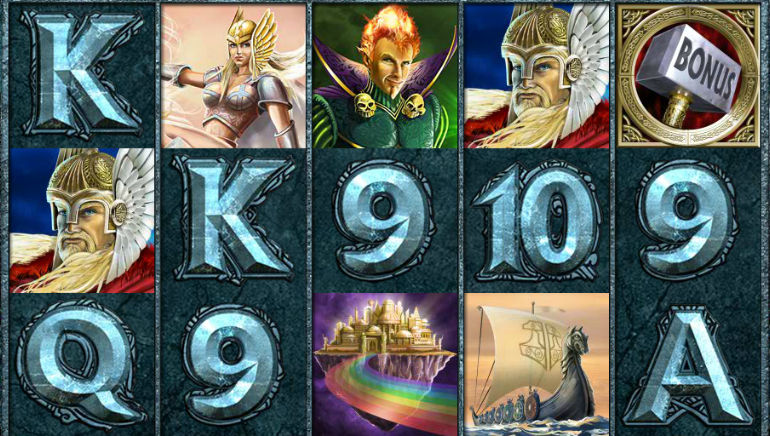 Thunderstruck II is a 243-ways to win slot featuring the Loki, Thor, Valkyries, Viking boats, and other symbols corresponding to the theme. It also has a bonus feature called the Great Hall of Spins, with four different options, where players can choose a large win multiplier, different expanding wilds, and rolling reels.

Years after Thunderstruck II, another developer took on the same subject and decided to approach it in a very similar fashion. It was Real Time Gaming’s Asgard slot, which features slightly better graphics but almost identical gameplay, with four bonus features. These features aren’t exactly the same, because in Asgard, players can get wild boost paylines and morphing symbols in two of the features, but it is hard to escape the feeling Asgard was heavily influenced by Thunderstruck II. 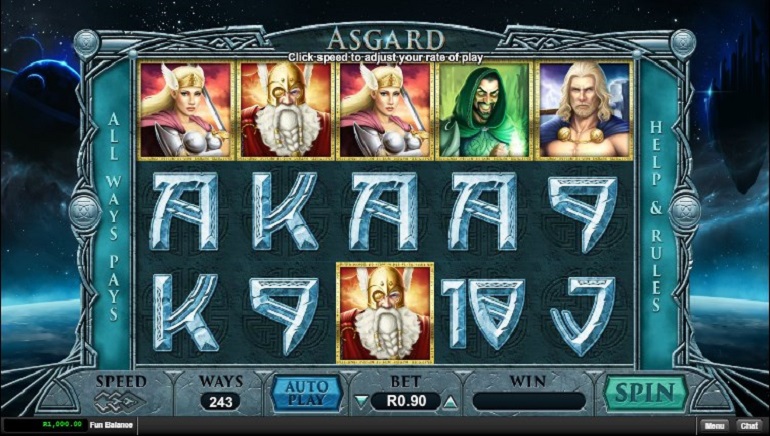 When Play’n GO released their Grim Muerto slot, players were fairly fascinated with it, because it managed to combine a rather unusual theme and Mariachi music with interesting gameplay, offering a product that was truly refreshing. In the event you haven’t had a chance to play it, Grim Muerto is themed after the Day of Dead celebrations, a Mexican holiday remembering those closest who passed away.

The game features skeleton mariachi players and soothing Mexican music to go along, offering a unique and memorable gaming experience. Although the topic is somewhat unusual, Play’n GO has made it work very well, delivering a game that’s worth playing.

Just recently, Red Tiger Gaming has released a slot called Esqueleto Mariachi, which translates as Skeleton Mariachis, and the resemblance with the Play’n GO game is impossible to miss. Reels are populated by decorated skulls and three colorful skeleton mariachis playing different instruments. Although Esqueleto Mariachi is somewhat richer in terms of in-game features, it would be fair to assume Play’n GO’s Grim Muerto served as inspiration for this one. 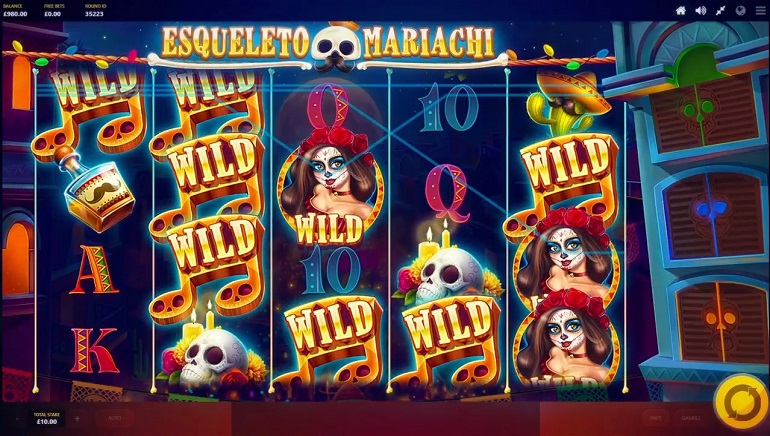 When NetEnt came up with their steampunk slot named Steam Tower, it caught the players’ attention partially due to its fairly unique theme. Setting the action in Victorian England, Steam Tower features a hero who’s in pursuit of a dragon who captured the love of his life (or something like that).

Although they weren’t the first to come up with such an alternative setting, NetEnt was probably the first to present such a strange world through a video slot. Although the graphics aren’t anything spectacular, they serve the purpose and fit with the theme.

Steam Tower is focused on the bonus game, where the hero tries to use his hooks to reach the top of the tower and rescue the lady, with the win multipliers growing with the each new floor he reaches, culminating at 7x at the top. 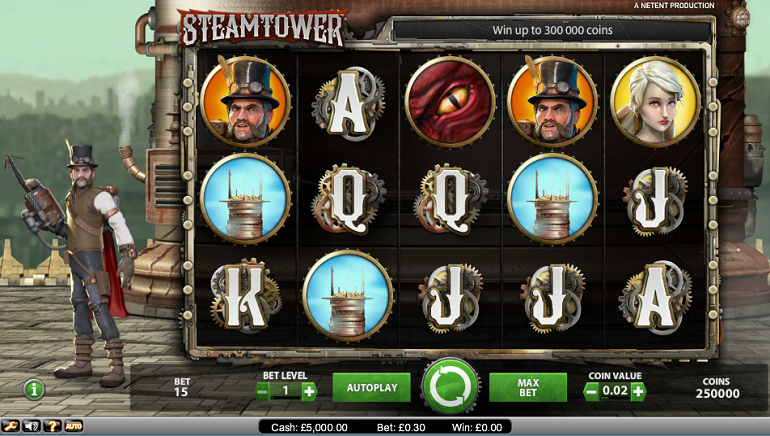 Apart from this NetEnt’s creation, we haven’t really seen any slots featuring this particular theme, probably because it is a bit out there. However, recently, Habanero has come up with their London Hunter slot, and the main idea is quite similar. The biggest difference is the fact that the main protagonist isn’t after a dragon but rather a T-Rex breaking havoc all over the city - because, let's admit it, dinosaurs are super cool, right?

Of course, being a new game, London Hunter has better-looking visuals and the game has its own interesting bonus features, so there is no denying this is a fairly original and interesting slot in its own right. Growing wilds and increasing multipliers perhaps make London Hunter an even more exciting game to play, but it is fair to guess that designers probably got their initial idea from Steam Tower. 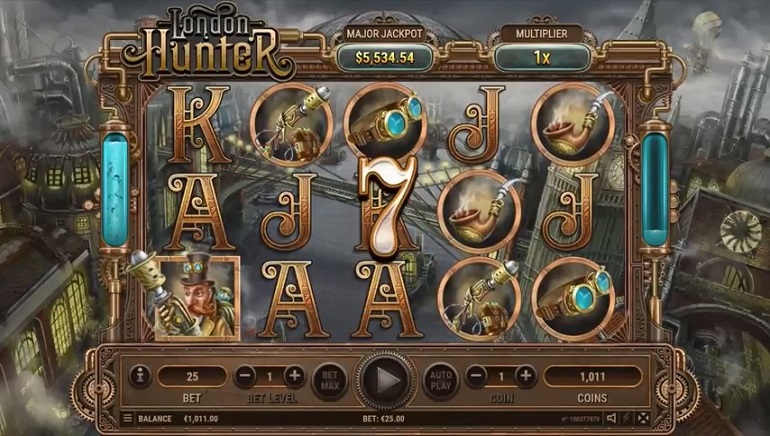 A Book of What?

Most of those who enjoy playing online slots are probably aware that “book” slots are an entire group of its own, where it doesn’t matter who made the game. There are “book” slots – and then there are other slots. And, most book slots are fairly similar to each other in terms of gameplay if not graphics and other features.

The slot that got the ball rolling was probably Novomatic’s Book of Ra. This is a hugely popular slot made in the 1990s that earned its fame in land-based casinos around Europe. From land-based venues, Book of Ra successfully transitioned to online casinos and it was welcome by the players of all shapes and sizes.

This slot needs no introduction, as most players are well-familiar with it. Featuring an ancient Egyptian theme, it takes you on an adventure inside a pyramid hiding various treasures. The game’s bonus feature is triggered by landing three book symbols anywhere on the reels, awarding 10 free spins with a randomly selected expanding symbol. 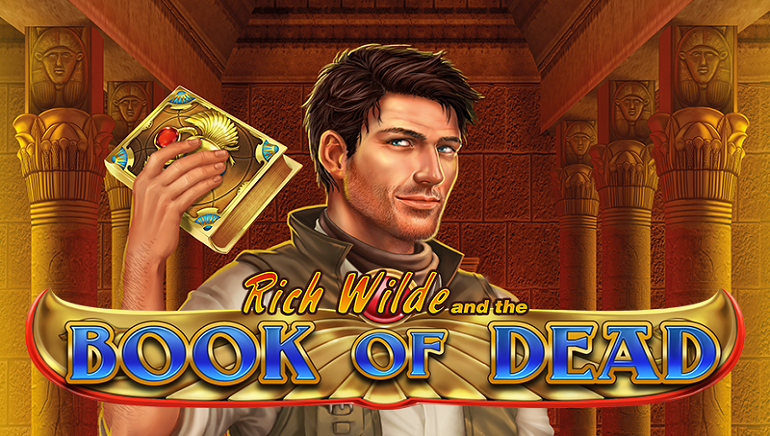 As mentioned, this book idea has been used over and over in numerous slots, but Play’n GO’s The Book of Dead is probably the most similar to what we may refer to as the “original.” Although done in a more stylish manner, all of the symbols resemble the ones from the Book of Ra slot and the Explorer is the highest paying symbol. Three books will trigger the bonus feature with an expanding symbol and the payout for the full line of Explorers is 500x in both games.

Getting to Know Lady Luck

Talking about Novomatic, another of their hugely popular games is definitely Lucky Lady’s Charm, in its original and Deluxe versions (nine and ten paylines). A fairly straightforward slot, Lucky Lady’s Charm is all about the bonus feature, triggered by three purple orbs landing anywhere on the reels. During the bonus, all wins are tripled and the initial 15 spins can (and often do) retrigger, which means Lucky Lady can pay very well if you catch her on a good day.

Symbols featured on the reels are a beautiful lady, golden coins, ladybugs, four-leaf clovers, and horseshoes, and lucky talismans, all of which are well-known symbols of good luck.

Novomatic’s Lucky Lady’s Charm has been around for a while and, just like Book of Ra, it started in land-based casinos and moved online. It is probably because of the game’s popularity other providers figured they needed their own version of the game. 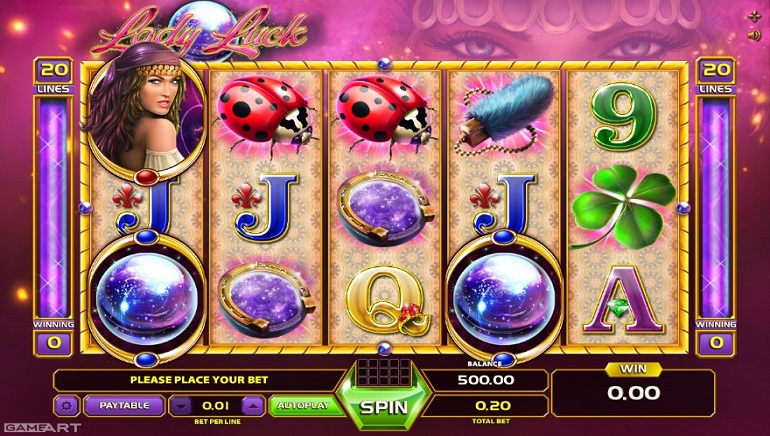 GameArt is one such provider that released the game called Lady Luck, featuring 20 paylines and nice graphics typical for newer slot machines. However, symbols on the reels are identical to the ones in the Novomatic game: four-leaf clovers, ladybugs, talismans, horseshoes, and golden coins, alongside the lady who, in this instance, is a fortuneteller of some sorts.

The bonus feature in Lady Luck is triggered by landing three crystal balls (orbs) anywhere on the reels. Players get 15 free spins during which all wins are tripled. Sounds familiar?

Why So Many Similar Games?

With so many development studios out there and practically an infinite number of available themes and setups, why is it that we’re seeing so many games that remind us of the ones we’ve seen before. There are probably multiple factors that come into play here, but one stands out.

It is hard to believe that companies with fully stocked development teams lack imagination or don’t want to work their designers too hard. If they wanted, they’d probably be able to put out the games that looked like nothing we’ve seen before all the time. The question is, would that approach work?

We've seen some "out of the box" themed slots in recent years, with titles like Genesis Gaming's hilarious Machine Gun Unicorn and Fugago's Trump It, which funnily relates to recent events. 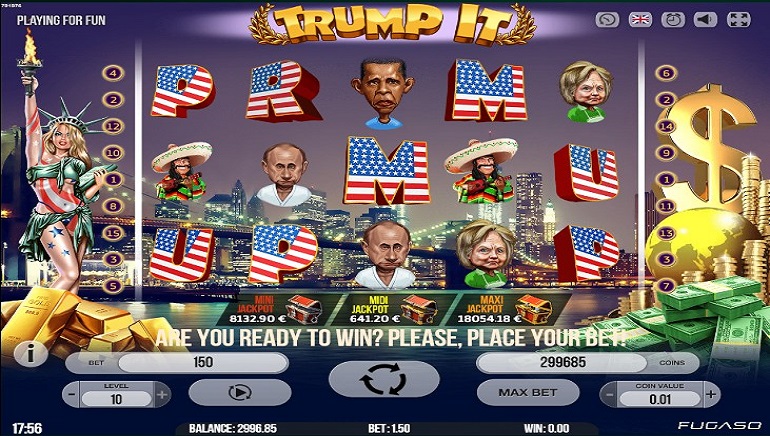 Some companies have been testing the waters developing games that are really different from everything out there, adding more winning ways and novel bonus features. It can’t be denied some of these companies have been successful so far, but the problem is, their games will probably appeal to newer and more adventurous players.

Players who have been around for a while have probably gotten used to certain games they know and recognize. They’ve probably had some memorable wins on many of these slots over the years. Now, if a new slot machine resembles one they played before, they are probably likelier to play it. They already know how the features work and what to expect so they don’t have to spend time figuring out new rules.

All of the slots we looked into in this article have certain touching points with one another but calling them copies would be going too far. All of these games have enough original visual and audio elements and in-game features to make them fairly unique.

This can hardly be said about Capcod's Stardust Evolution which is very reminiscent of NetEnt’s immortal Starburst, only with better graphics and sounds. The fact the developer decided to call their game “Stardust” also speaks to the fact they didn’t actually try to hide where the influence and the idea came from. 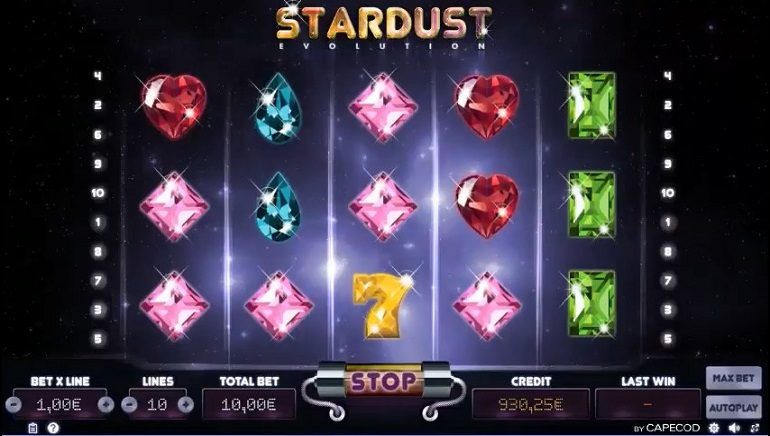 Both games have ten paylines, wins are paid both ways, and symbols featured on the reels are colorful diamonds, 7s, and Bars.

Just like in Starburst, wild symbols in Stardust Evolution will stick and expand to cover the reel for a free re-spin. Another wild adds another re-spin, with both wilds locked, and if the third wild lands, the final re-spin is awarded with the three middle reels fully wild.

The idea and originality aside, fans of Starburst would probably enjoy Stardust Evolution, because the game is virtually same, only with better graphics and sound effects. After all, Capecod's variation came out in 2016, while Starburst is one of those slots that seem to have been around forever.

Big Ones Mix It Up

The biggest game studios out there have necessary resources to put out dozens of new slots every year. These studios usually mix things up, experimenting with completely fresh games but also releasing some titles that feel familiar. That way, they get the best of the both worlds.

Some may think it strange that companies do not complain when someone releases a slot that’s similar to one of their earlier releases. However, it seems that either no one is really bothered by it or it is very hard to copyright game themes and symbols, especially the more generic ones.

The fact remains, every now and then, there is a new slot that doesn’t feel that new. Whether this is a good or a bad thing, you be the judge.