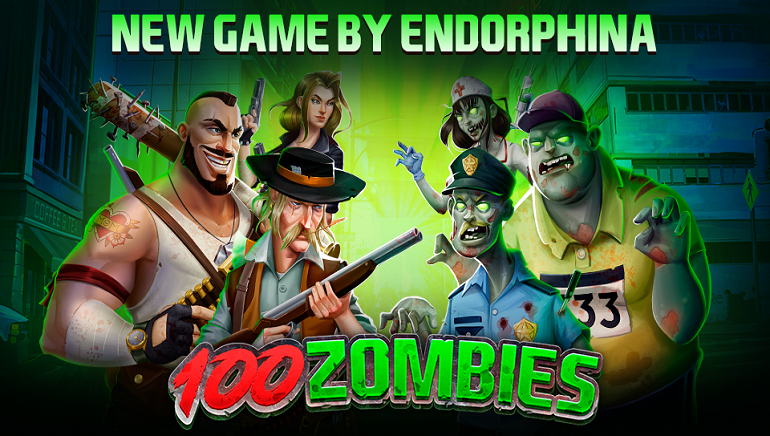 'Tis the season to scare and be scared with a number of Halloween-themed slot games for you to play.

Halloween is right around the corner and as preparations are made for this years' unique trick or treating activities, there are a number of new slots that have been released to commemorate the Holiday. These games have been developed by the leading studios in the industry and are fan-favorites all year, but, much more so during the month of October.

You may have not heard of some of these games before, but we can assure you that they are spooky, scary, thrilling, and, a lot of fun.

Let's take a look at the best Halloween-themed slots of 2020.

This game is by far one of the most thrilling of the season. Developed by the award-winning studio, Endorphina, 100 Zombies literally throws players into a gut-wrenching battle to stay alive against the brain-eating zombies. These zombie games are very popular and 100 Zombies is a prime example of just how good they can be.

This 5-reel, 4-row slot has 100 pay lines, stacked wilds, and a spins feature. The game symbols are common zombie apocalypse characters including the brave surviving fighters reminiscent of television shows like the Walking Dead. There is a young fearless man, an old man, a very adventurous woman, and, waves of zombies that you'll need to fend off. The wild symbol is the vault that substitutes for all the symbols, albeit except for the scatter symbol, which is a sign for biological hazard.

This new slot game was invented to scare as players will spend a night in a haunted house. There is a ghost that lives in the walls, but, it is a generous ghost that has a tendency to give away special bonuses to those brave enough to stay the night. The eccentric ghost is that of a deceased French man named Pierre. Players will search for gems and special treasure across the 5-reels and 20 paylines.

There are three modifiers that can be triggered randomly throughout the main game or during the Spins feature by collecting a certain number of gems. During a reel spin, Pierre can appear and add up to 15 Wild symbols. Other modifiers include the Mental Multiplier Mania Modifier and the Spooky Symbol Slither Modifier.

This Halloween, there is one more game that you may want to try. Realtime Gaming developed and released Halloween Treasures, a Halloween-themed slot game that will surely give you your Halloween fix. This game provides the fear factor you'd expect from a Halloween slot with spooky symbols on the reels including a Vampire, a scary carved Pumpkin, a potion, candles, a witches hat, and more.

This game offers 243 ways to win across its 5x3 reels. There are wilds, scatters, spins, and multipliers, in addition to a Halloween Jackpot feature. This game will surely get you in the mood for Halloween and it is available at the casinos offering the RTG suite of games.

Red Rake may not be one of the most well-known names in the iGaming industry, but its games are second-to-none. This game is set in Dracula's Castle, but, instead of getting your blood drained by Nosferatu, there are multiple opportunities to win. This game is on the Million Ways system, which essentially gives up to 1,000,000 ways to win.

Hot Hot Halloween was released by Habenero in 2019, and it pokes fun at Halloween every chance it can. The symbols on the reels include severed hands, coffins, eyeballs, and related Halloween symbols. Instead of using these symbols to scare, they are designed to be like cartoons, making light of the spooky Haloween tradition.

The game is played over 5x5 reels and depending on the paylines where wins are generated one's rewards can be multiplied by up to 3x. The game features single and double wilds, spins, and the random Hot Hot Bonus, with up to 1,250x the wager.

Beautiful Bones is a Microgaming slot, with 5-reels and 243 paylines. This video slot is one of Microgaming's most popular Halloween-themed slot games. The slot is inspired by Mexico's Day of the Dead holiday, and the game is designed with the beautiful bone skulls that are traditional for the day.

The game features a plethora of special features including a scatter, multiplier, and a bonus game that will have you dancing with the dead in no time. Beautiful Bones is one of those games that will put you in the holiday spirit, with the spirits on the reels.