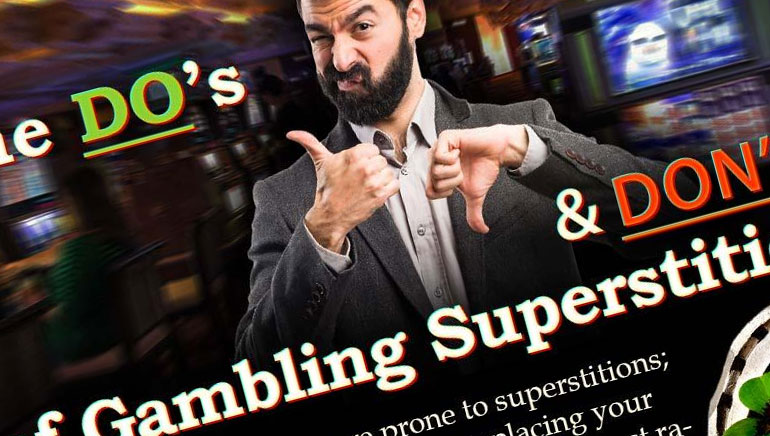 Some players swear that their success in the exciting world of gambling is due to dumb luck. Others would say having skill and understanding of the game is what brings in the real big bucks. But there are those that believe in weird and sometimes downright crazy gambling superstitions that are the key to winning, and in some cases continuous winning.

Gambling myths and superstitions have been around for a long time. Players have based much of their winning strategies along with a routine, or pattern that they do not, and will not change for anyone or anything. Sometimes it is just as simple as crossing one's fingers, which is one of the most common superstitions, but some really devoted believers of superstitions go a lot further.

From Personal Hygiene to Colors, Numbers and Horseshoes

One of the most well-known superstitions in all of gambling is based on certain numbers. 7, or Lucky 7's are of the longest standing gambling legends that players religiously believe are luckier for some reason. If you stop someone on the street and ask them to pick a number from one to ten, there is a good chance that 7 will be the first thing that they say. It may sound strange but this is one of the most common superstitions in the world, but it is far from the weirdest.

In China, many players believe that during a gambling winning streak, one's hands should never be washed during that time. This comes from the Chinese belief that water is essentially money and if you wash whatever dirt or grime off your hands you are washing the money straight out between your fingers. Sounds weird, but there are even crazier gambling superstitions out there that people from all over the globe take a part in.

Wear Red, don't wear black. If you spill salt before gambling, you may as well just forget about playing. There is no end to the lengths that people will go to fulfill their gambling beliefs, do you have one too? Check out our cool infographic and be wiser!

Use the following HTML code to embed this infographic on your site: