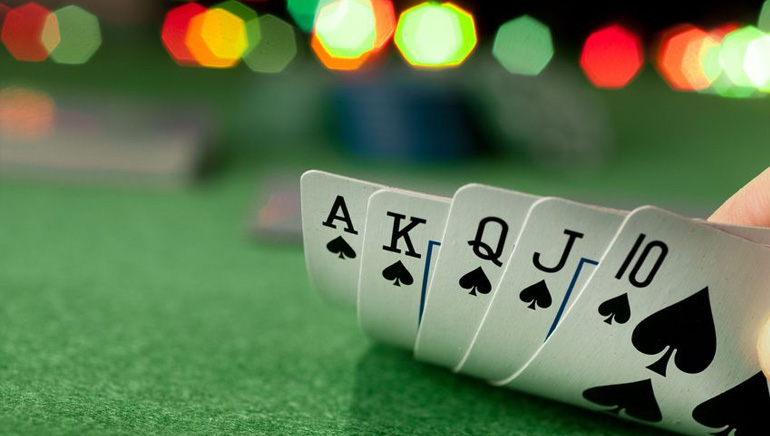 Poker players enjoy the best of both worlds when playing Online Hi-Lo.

Texas hold‘em is by far the most popular type of poker, but Omaha comes in second and the Online Hi-Lo variety has its dedicated group of fans. It is far more complex, with more winning combinations and has the inherent charm of winning with both the strongest and weakest hand. The similarities to Omaha poker are so numerous, that those who know one game will have no problem in making the transition to the other.

Just like the traditional Omaha, Online Hi-Lo is a community card game, with up to 10 players sitting down at the same table. The one who wins the pot will claim all the chips or half of them, depending on the strength of the hands showed by the other players still standing.

Each players gets four cards, one at the time as the action moves clockwise around the table and then they proceed with the betting rounds. Two players assume the role of small and big blind, while the other participants have the option of calling the blinds, betting, raising or folding their hands.

After each betting round, the dealer will reveal one more card, with three of them being dealt on the flop, another one on the third and a final card on the river. Compared to the original Omaha, Online Hi-Lo is a split pot game, so at the showdown the pot will be divided in two halves. The player who has the best hand will win half of the pot, while the rest of the chips will go to the one who has the worst hand.

In both cases, players will have to have qualifying hands, more precisely to use any two cards from their hand and three of the community cards. It is perfectly possible for the same player to have both the strongest and the weakest hand, in which case he or she will claim the entire pot. Aces can be used for both high and low hands, with both flushes and straights being completely ignored in Online Hi-Lo.

In most cases, following these rules will result in the pot being fairly distributed among those who have the best and worst hand. On those rare exceptions when there is an odd chip that can’t be split in half, the player who has the winning high hand will claim it.

There are also situations in which no player has a qualifying low hand, in which case the player who shows the winning high hand will claim the entire pot. Participants only need to use at least two cards from their hand but nothing prohibits them from using the same cards to create both a high and low winning hand.

Aces usually serve this purpose as they can assume different values and straights don’t have any impact on the strength of the hand. Online Hi-Lo is not a declare-game type of poker, therefore players are not expected to announce their intention of playing for the high or low hand.

Instead, participants perform multiple calculations on their chances to emerge victorious, based on the cards dealt on each street. The right course of action is to bet increasingly high amounts on the flop, turn and river without overplaying the hand. Compared to both Texas hold ‘em and regular Omaha poker, Online Hi-Lo hands are more directly and radically influenced by individual cards.