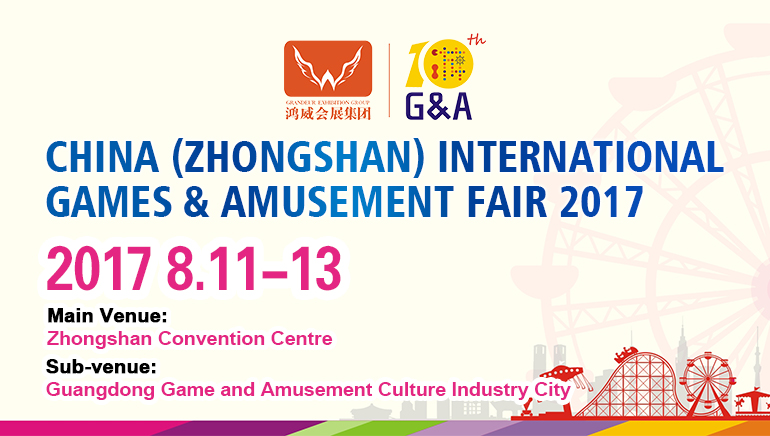 The China International Games and Amusement Fair is slated to take place between August 11 - 13, 2017. The convention will be held at the Zhongshan Convention Centre. This is the 10th anniversary of the G&A Fair.

The China International Games & Amusement Fair is slated to take place between August 11 - August 13, 2017. The main venue is the Zhongshan Convention Centre and the sub-venue is the Guangdong Game and Amusement Culture Industry City. This convention serves as a platform for tapping into the lucrative Chinese gaming market. The 2017 G & A Fair is the 10th such conference and organizers are preparing for a bigger reception than ever before.

The China International Games & Amusement Fair was launched in 2008. At inception, the exhibition covered 44,000 m², and by 2016 it had increased to 75,000 m². In that time, the number of exhibitors increased from 243 in 2010 to 400+ by 2016. 2017 promises to be even more impressive with vendors and exhibitors from across China. Media partners include Jakta, Slotegrator, EIN Presswire, Casino Side, PlayEx and Online Casino Reports among others. Visitors will be able to gain access to prominent gaming exhibitors in China.

Which Gaming Exhibitors will be Showcased?

During the 2016 International Games & Amusement Fair in China, 16,356 buyers from 36 countries were represented. Among the many exhibitors slated to attend the 2017 exhibition include Golden Horse, Unite Art, Golden Dragon, G-Look, Derun Rides, Universal Space, WAHLAP, and others. Preliminary estimates indicate that some 460 exhibitors will be present at the 2017 exhibition. This year’s illustrious event will cover an exhibition area of 100,000 m². Some 70,000 visitors are anticipated, as many purchasers are looking to enter the Chinese gaming market.