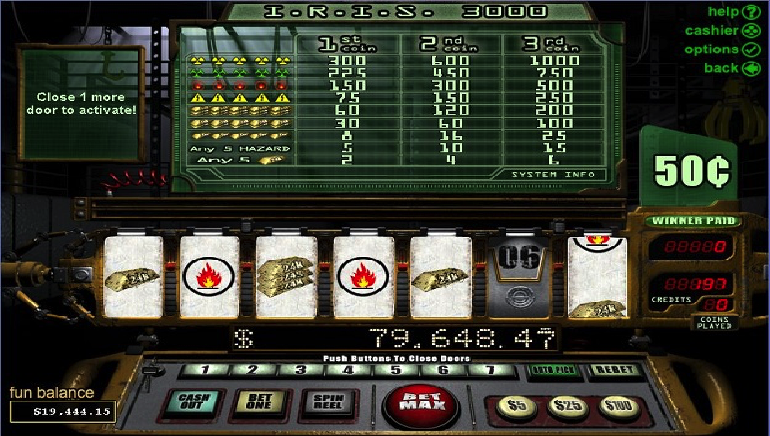 Enter a spy-themed adventure where defeating an intelligent slot could trigger a progressive jackpot at RTG casinos.

I.R.I.S. 3000 where the acronym standards for Interactive Real Intelligence Slot, but the bigger takeaways to draw from the game are the progressive jackpot and the quirky design.

RealTime Gaming (RTG) is the software provider that made the I.R.I.S. 3000 slot, and it immediately stands out for the fact that there are six reels, one row, and a single payline.

Players will begin the game by selecting five doors from a possible seven, but it’s also possible for this to be randomised. Then you stake a bet in multiples of $0.50 in order to start playing.

Winnings can then be earned through matching five of the same symbol or symbol types. For example, it would be possible to win from five single, double, or triple gold bar symbols.

I.R.I.S. 3000 has a feature where one red dot is added above the doors when two coins are staked, while two red dots are added for three coins. The aim is to land the dots on the closed doors and eventually open both.

Open the sixth door and there will be a sixth reel, while opening the seventh door will trigger a multiplier side game. At this point, the progressive jackpot can be won with five radiation symbols.

The I.R.I.S. 3000 progressive slot has a jackpot that has been designed to start from a healthy $25,000. At times, the progressive jackpot can be tricky for players to unlock, which means that the total has even surpassed $120,000 before being won.