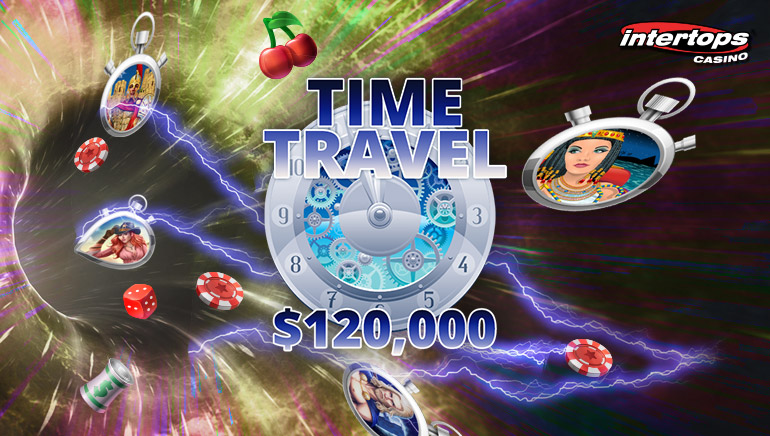 The Time Travel Casino Bonus Contest is now running at Intertops Casino, with $120,000 in prizes to be be won between now and October 5th.

Intertops Casino players can win a share of $120,000 in prizes as they race against each other in the Time Travel Casino Bonus Contest. Between now and October 5th, those with the most points at the end of each week will claim a $500 prize, with a special $1000 prize draw at the end.

It's linked to the launch of Cubee, a new slot that takes players from the Stone Age to the times of Vikings and then Pirates.

Players automatically earn points with each wager during the Time Travel Casino Bonus Contest. A leaderboard keeps track of the top ranked players throughout each week, and on Mondays, the bonus prizes are awarded. While the top players claim a big win of $500, there are lots of runner-up prizes. Even those ranked at 300th get a reward.

It adds up to a huge $120,000 over the course of the promotion. At the end of the Time Travel Casino Bonus Contest, a special draw takes place, with all of the weekly top 20 players qualifying. One name will be picked to win a $1000 bonus prize.

An Intertops Casino Manager said he thought of the promotion while playing the time travelling Cubee slot machine. This Realtime Gaming slot has a cartoon style and features a vortex in the middle of the game that releases monsters. If the Cubee character defeats them, players win the round.

Cubee joins the a range of over 300 slots and other games at Intertops Casino, and players will earn points with each qualifying wager across the range during the promotion.

Remember to only ever gamble with money that you can afford to lose.