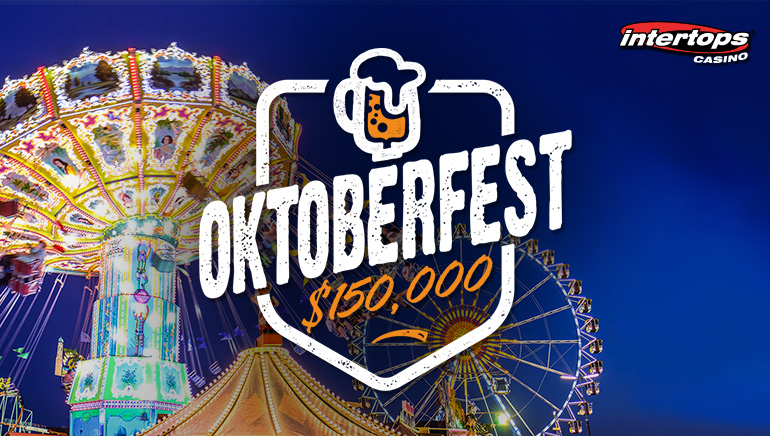 Intertops Casino celebrates Oktoberfest with a $150,000 casino bonus contest. Players can win between $30 and $500 each week.

Summer is ending and Fall is just around the corner. Players at Intertops Casino won't mind the longer nights though, as they can be celebrating Oktoberfest with the special $150,000 casino bonus contest.

Join The Party At Intertops Casino

Players will be able to compete for a share of $30,000 each week from now until October 7th. There are top prizes of $500 going to lucky players who head the weekly leaderboards, but even those further down can grab some prize funds. Special draws each Thursday between now and the end of the contest mean that anyone can win, even if they have just played a little bit in the preceding week.

To qualify for entry to the $150,000 Oktoberfest casino bonus contest, players will need to make a deposit of $75 or above. Points are earned at the rate of 1 per $100 staked on the games, and a leaderboard reveals who is leading the contest. The more you play, the greater your prize could be at the end of the week.

Each Monday, the winners are paid their prizes, and the top 300 players all qualify for a reward. Those at the bottom of the leaderboard still get a healthy $30 bonus paid into their accounts.

There are 50 bonus prizes of between $20 and $150 with each Thursday draw and at the end of the contest, 1 lucky player will be picked from the top 20 weekly winners to get a prize worth $1,000.

If you can't make it to an Oktoberfest party, then join Intertops Casino and you can still celebrate in style.