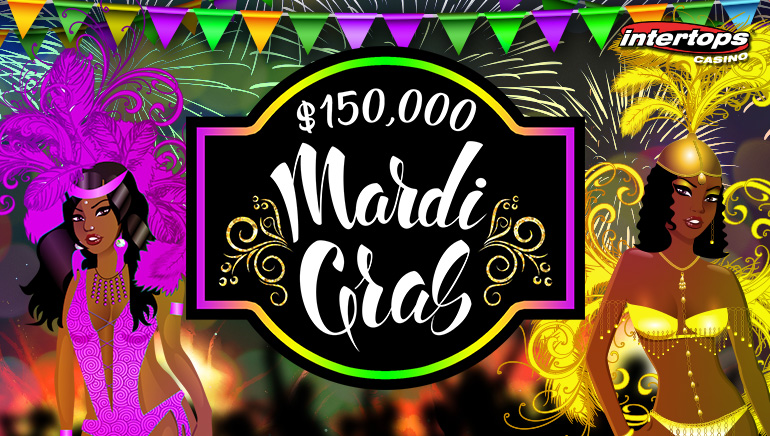 Intertops Casino is running a special Mardi Gras promotion, which rewards players with lots of bonus cash when they play the games between now and 5th March.

Intertops Casino is giving away $150,000 in bonuses throughout their special Mardi Gras competition that runs every week until March 5th. It's a great way for players to grab extra rewards as they play the games and move up the weekly leaderboards in this celebratory tournament.

Everyone's invited to the Mardi Gras at Intertops Casino, all they need to do is play the games to earn 1 point for every $100 wagered. The more points they collect, the higher up the leaderboard they climb each week, and at the end of each Sunday, those at the top will win some huge prizes.

Win Even More Each Thursday

Fifty randomly chosen players will even be granted extra bonuses of between $20 - $150 every Thursday throughout the Mardi Gras contest and there's a special $1,000 cash prize to be won at the end of the promotion. All players who have been in the top 20 in any week will be entered into a draw to win this fantastic prize.

How To Join The Party

All Intertops Casino players who make qualifying deposits of $75 or more will be able to join in the celebrations. It's running until March 5th, and the leaderboards get re-set at the end of every Sunday, so there's still plenty of time to get playing the games and winning some big prizes at this popular site.