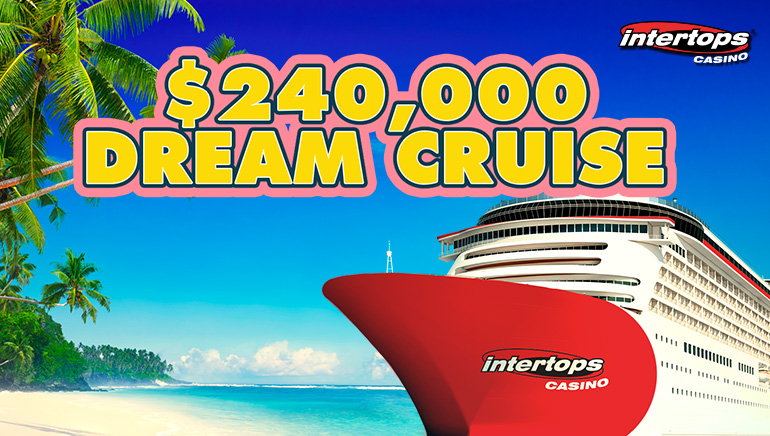 Intertops Casino customers can look forward to a Dream Cruise contest, where they can compete for a share of $240,000 worth of prizes.

Intertops Casino is famed for their special promotional offers and this summer, they are giving away an amazing $240,000 in the Dream Cruise Bonus Contest.

Each week between now and September 2nd, players will compete with each other for $30,000 in special rewards. Points are earned automatically when they play across the range of over 600 slots, table and card games from the Realtime Gaming range at Intertops Casino.

Eligible games include the brand-new 777 slot, which features classic 3-reel gameplay with traditional fruit symbols. A wild symbol triples winnings and a Hold option boosts the chance of landing a winning combination across the single payline.

One point is earned with each $100 wagered on the games. Those who stake the most will see their player names appearing on a weekly leaderboard.

They can check the leaderboard at any time to see if they are among the 300 players who will qualify for a share of the $30,000, but if they don't make it, there's always next week. The top-ranked players claim $500 each.

Look Out For A Special Draw

The contests run until Sunday nights over the next few weeks, with prizes awarded each Monday morning. The top 20 players from each week will be entered into a prize draw. The draw takes place at the end of the promotional period and sees one lucky customer collecting a $1,000 prize. They can spend this on whatever they want, even putting it towards a luxury vacation.

With total prizes of $240,000 up for grabs, the Dream Cruise Bonus Contest is one that Intertops Casino players won't want to miss out on.