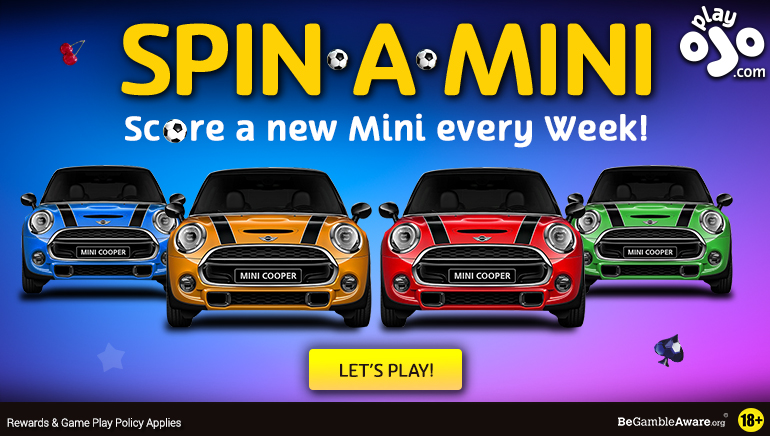 Play your favorite slots during the football World Cup and you'll be in with a shot to win one of four brand new Mini Coopers & many other great rewards.

If you're a football (soccer) fan there is a lot to look forward to in the upcoming weeks as the prestigious World Cup is set to kick off in about ten days. Adding to the excitement and bringing two passions together, i.e. football and gambling, is PlayOJO Casino with their remarkable "Spin-A-Mini" promotion, giving the luckiest players a chance to win a brand new Mini Cooper every week from June 14 to July 15.

The "Spin-A-Mini" promo is powered by SkillOnNet, the software provider behind PlayOJO Casino and it is poised to make an already exciting summer even more thrilling for all football enthusiasts. Being in with a chance to win is also very simple, so all players can participate.

To get your ticket for the weekly tournament, you'll simply need to play 100 spins on the slot selected for that particular week. The games that will be featured during the promo are NYX Gaming's Foxin Wins Football Fever, Vikings Go to Hell by Yggdrasil, Legacy of Egypt from Play'n GO, and GVG's Ninja Master.

Once you've played 100 spins on the slot, you'll receive your entry to the Daily Tournament and wins from each of the daily tournaments across the week are added to the leaderboard. Tournaments are played using Tournament Free Spins so you don't have to risk anything to play. At the end of the week, the player with the most points on the leaderboard will receive a new Mini Cooper.

Of course, four brand new Mini Coopers are just the tip of the iceberg when it comes to the prizes players can win during the "Spin-A-Mini" promotion at PlayOJO Casino. Luxurious trips to dream destinations and many other rewards are up for grabs as well.

So, if you've already been enthusiastic about the weeks ahead, you now have even more reasons to get excited. Get involved with PlayOJO and their "Spin-A-Mini" promotion and you might be celebrating your national team's world cup victory driving across the city in a brand new car!