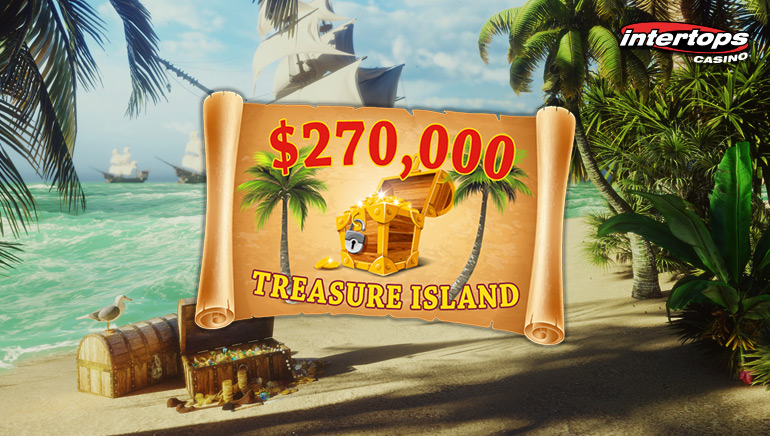 Intertops Casino players have from now until September 6th to compete for big prizes in the Treasure Island Bonus Contest. There's $270,000 up for grabs throughout the promotion.

The Intertops Casino Treasure Island casino bonus contest has arrived. Players have until 6th September to compete for a share of $270,000 in bonus prizes, with weekly winners collecting $500 each.

The Treasure Island contest is open to all players at Intertops Casino who deposit and play through $75 or more in the week. Frequent player points are collected on each wager across the hundreds of games at the casino at the rate of 1 point for every $100 staked on the games.

The more games played, the more points customers can accumulate and at the end of the week, those with the most points win a share of the prizes. There are 300 weekly winners, with $20 rewards for the 300th-placed and the top 20 players enter a special prize draw. At the end of the contest, one player from this group will win a $1,000 prize.

Each Thursday, another draw is held, with those who played between Monday and Wednesday winning any of 50 prizes from $20 to $150. The Treasure Island contest is now open, and running throughout the Summer.

Players have even more choice, with new titles available from games supplier, Real Time Gaming (RTG). The latest is Jackpot Cleopatra's Gold Deluxe, which updates one of the biggest slots and features a progressive prize which seeds at $100,000. Miami Jackpots is another upcoming progressive game that's due for release in the near future.

''Avast me hearties, there's big prize money to be won this month!'' said Intertops' casino manager. ''Earn more points than the other landlubbers to claim the top prize each week.''

Remember to only ever play with money that you can afford to lose.