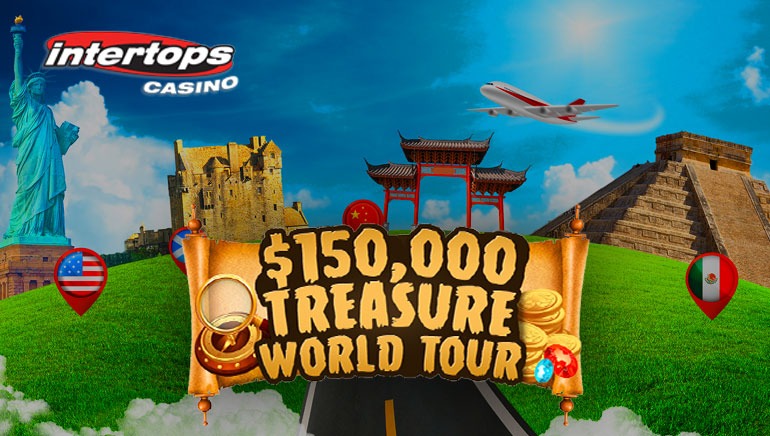 Intertops Casino will offer a series of amazing bonuses to its most loyal players as they go on a world tour treasure hunt - there's $150,000 in bonuses and prizes to snag.

Intertops Casino offers an amazing $150,000 in bonuses and prizes this month as its most loyal players go on a world tour treasure hunt.

If you thought just visiting the most popular tourist destinations in the world was enough of a good time then the amazing series of perks players will get as they travel the world for five weeks will make that vacation even better.

Every week of the following five weeks, hundreds of Intertops Casino players will get bonuses as high as $500 as they go on a world treasure hunt. Total weekly prizes will go as high as $30,000 with a $1,000 cash prize awarded to a very lucky player at the end of this amazing event. As players visit stunning destinations such as Scotland, Mexico and China they receive special bonuses dictated by the country they are in.

The Intertop live leaderboard shows each player’s ranking and number of points. Each Monday, the best 300 players will receive bonuses that can go as high as $500. Once the bonuses are awarded, the leaderboard is reset and players get to chance to compete again for the generous rewards.

Other special offers includes special Thursday bonuses, where players that gamble Monday to Wednesday are automatically eligible for a Thursday special bonus which can go up to $150. Even more, the top 20 players of each week are automatically entered in the draw for the $1,000 grand prize which will be awarded at the end of the promotion, on June 6, 2016.

Time for Some Poker Education