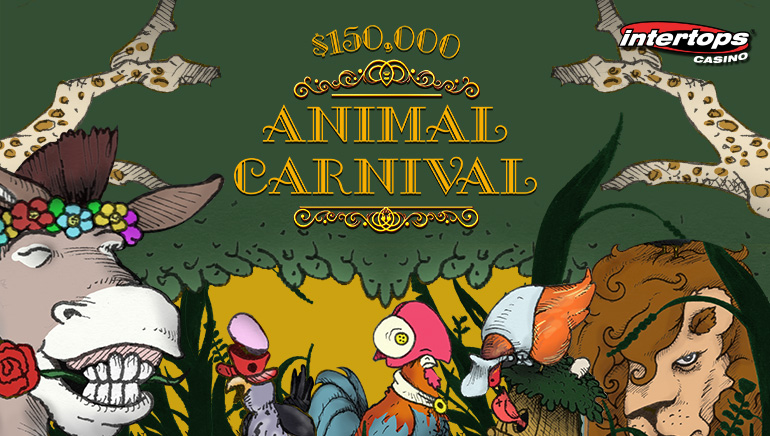 Intertops Casino players can grab their share of $30,000 in weekly prizes with the Animal Carnival promotion that runs between now and March 4th

Intertops Casino is running a special promotion between January 28th and March 4th, with the Animal Carnival giving players the chance to land a share of $150,000 in bonuses.

The huge Animal Carnival offer should have Intertops Casino customers stampeding to join up. Weekly cash giveaways of $30,000 will see 300 players awarded bonuses of up to $500. Anyone depositing and playing through $75 or more will qualify for these special Monday Bonuses each week.

Players will also have the chance to win one of 50 bonuses worth between $20 - $150 in a special draw to be held each Thursday during the Animal Carnival promotion. A deposit of just $25 in the week is enough to qualify for the Thursday draw.

Each $100 played through on any game will earn 1 point. The players with the most points at the end of each week will be awarded the free bonuses. At the end of the promotion, one lucky player who has been in the top 20 in any previous week will be picked for a special $1,000 bonus.

An Intertops Casino manager said ''Frequent players win top prize money - the more you play the more you can win.'' They added that ''But even occasional players can win the random draws we do every Thursday. Play just a little Monday through Wednesday and you can win up  to $150''