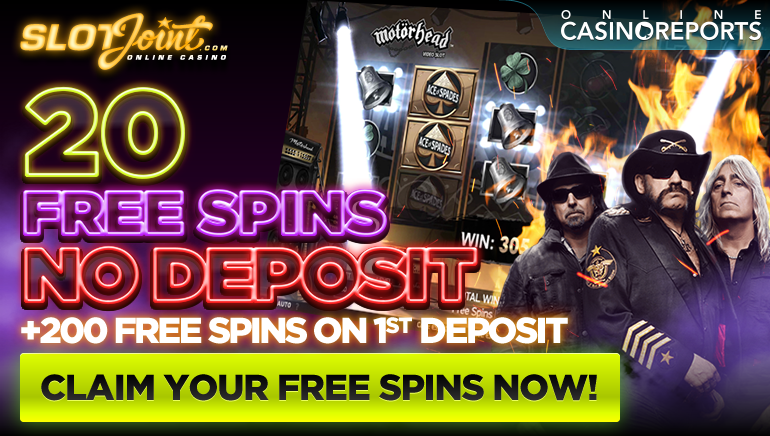 SlotJoint Casino is celebrating the release of NetEnt's new Motorhead slot by giving you 20 no deposit free spins in this generous special offer.

For anybody wanting to try Motorhead, they can play free of charge at SlotJoint Casino. All you have to do is create a new account and you will receive 20 Motorhead free spins with no deposit required. After claiming this special offer, you will be ready for action in this thrilling spectacle, and SlotJoint will give you 200 free spins on your first real money deposit.

The Ace of Spades

Almost any rock fan will know about The Ace Of Spades and just how amazing it is. Hearing lead singer Lemmy roar out the lyrics in this frenetic track will always get your blood pumping. Well, you can now get that feeling while playing a video slot. Motorhead boasts a rock mode where you can turn on the music to enhance your experience; Motorhead fans will enjoy other tunes from Motorhead as well like Iron Fist, Killed by Death and Overkill.

In the actual game, you will encounter a five-reel slot that defies convention. Basically, you have an extra symbol on the third and fourth reels, while an extra two are on the fifth – this allows for a staggering 76 paylines.

Motorhead also boasts mystery reels that will transform a mystery symbol into another symbol when it appears. With the Bomber feature (named after the song/album), players can then randomly get up to 10 mystery overlay symbols at once. Finally, you can trigger another 10 free spins by obtaining three or more scatters.