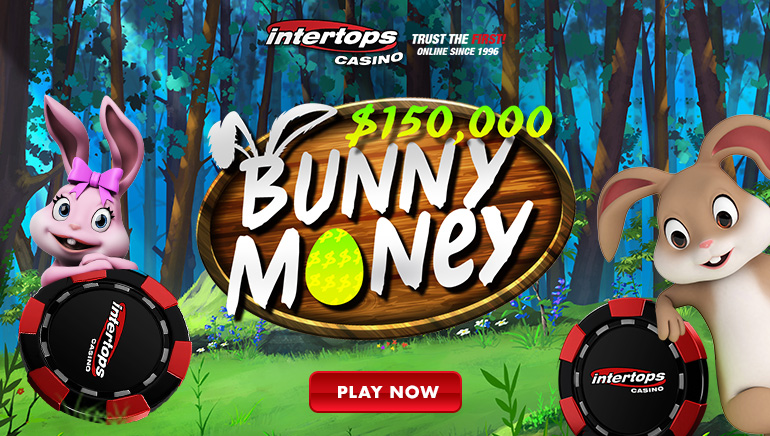 Intertops Casino is running a Bunny Money promotion that will see them awarding their loyal players with a total of $150,000 between now and 8th May.

It's nearly Easter time and that means online casinos are offering their players special seasonal promotions. Intertops Casino has revealed their Bunny Money deal which will see them hand out $150,000 in bonuses from now until May 8th.

Anyone who hops over to Intertops Casino and plays their games will earn points with each qualifying wager. The more they play, the higher up a leaderboard they will climb and once they are in among the top 300 for the week, a big bonus prize is waiting for them to collect.

Everyone is entered, so there's nothing that players need to do to get their hands on the bonuses other than play any of the hundreds of games featured at this popular online casino throughout the 5 weeks that Bunny Money is running for.

Each Monday, the top players are given bonuses worth up to $500 and on top of this, the top 20 for the previous week will be entered into a prize draw for a further $1000 reward. It adds up to $30,000 each week until the end of the promotion, and with such huge prizes waiting to be collected, this is sure to have players bouncing for joy as they climb up the leaderboard towards those valuable top positions.

A casino manager from Intertops has said ''We've given bonuses to players that didn't even realize they were earning points as they played.'' adding that ''A lot of players though, really enjoy competing with each other for the top spots on the leaderboard - and top weekly bonuses.''