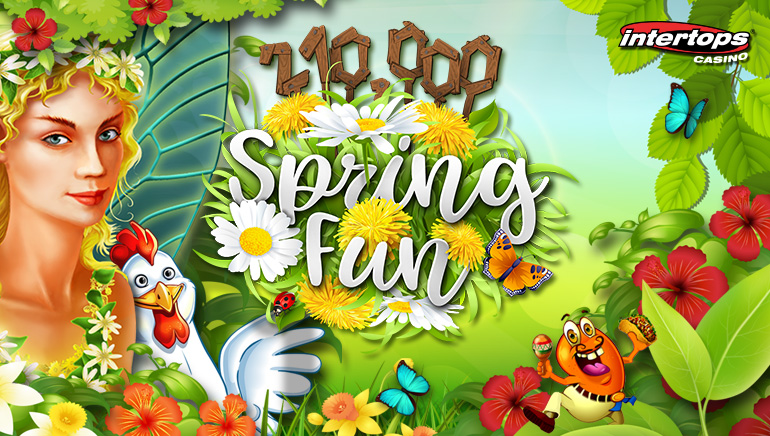 Throughout March and April, Intertops Casino will be offering numerous occasional promos, with their Spring Fun leaderboards awarding $210,000 in bonuses.

Spring is just around the corner and that's great news for all of us who aren't fans of winter shenanigans and prefer our streets bathing in the sun. If you're also a fan of online gambling, then spring coming early at Intertops Casino is another awesome news, as the site decided to welcome the new season with their Spring Fun promo filled with some sweet prizes.

Intertops Casino launched two decades ago and this March they're celebrating their 20th birthday. To mark this momentous occasion and kick off the warmer half of the year in style, the operator has launched their Spring Fun promo, offering $210,000 up for grabs.

The Spring Fun bonus contest will run throughout March and three weeks of April, ending on April 23rd. For the duration of the promo, Intertops will dish out $30,000 in bonus money every week to the players earning most points on the weekly leaderboard. Simply deposit $75 or more during the qualifying week and play your favorite games to be in with a chance.

If you're low on funds or this is out of your price range, there are more prizes to be had during Spring Fun. On every Thursday during the promo period, there will be a draw awarding 50 free bonus to random lucky players. Awarded bonuses are between $20 and $150 each, and to qualify for the draw, you only need to deposit $25 during the week.

Before it is all said and done, there will also be a $1,000 draw at the end of the Spring Fun promo. All players who qualified among the top 20 during any week will be in with a shot and one lucky winner will get a big $1,000 bonus.

As if this weren't enough, there will also be a special anniversary draw at the start of April, awarding $2,000 in prizes. For every $50 wagered at Intertops during March, you'll earn one ticket to the draw.

For all slots aficionados out there, the casino has also launched the Classic slot tournament, running throughout March, where players will spin the reels on the Dynasty slot, competing for their share of the accumulated prize pool.