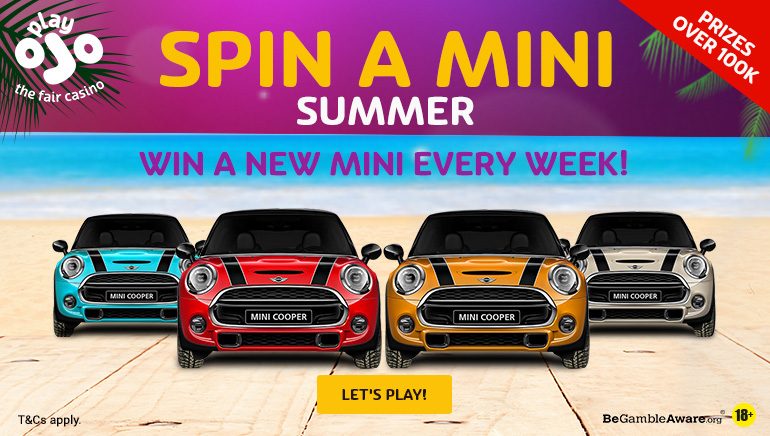 Play your favorite slots, win tickets to receive spins for the weekly tournament, and get lucky to top one of four leaderboards throughout August to walk away with a brand new Mini Cooper

If the idea of winning a brand new car as a side-effect of playing some of your favorite slots sounds good to you, you should definitely check out and get involved with PlayOJO Casino Spin-A-Mini promotion kicking off on August 5 and running throughout the month, wrapping up on September 2.

Four Mini Coopers up for Grabs

With things starting on Monday, August 5, the Spini-A-Mini promo offers players four shots at winning a brand new Mini Cooper by winning one of four weekly tournaments. To get involved, all you need to do is do at least 100 spins on the slot of the week to receive a ticket to the tournament. You'll earn one ticket for every day of the week you put in 100 real money spins.

Tournament dates and games are as follows:

You'll be able to earn tickets for every weekly PlayOJO tournament by playing at least 100 spins on the selected slot and all tickets won during the week will be included in the weekly tournament, with each ticket giving you 20 tournament spins for the Spinning Wilds slot.

Spin Your Way to a New Car

The tournament spins don't have any monetary value as such but the winnings will be used to determine your position on the tournament leaderboard. The winner of each tournament will walk away with a new Mini Cooper. The second place will receive two tickets for their dream vacation destination. Of course there are many more prizes up for grabs, including heaps of free spins every week.

If you're not happy with the number of tickets you won during a week or simply want to boost your chances of winning, tickets can also be bought at €1 each, giving you 20 tournament spins, just like the ones you win through your play.