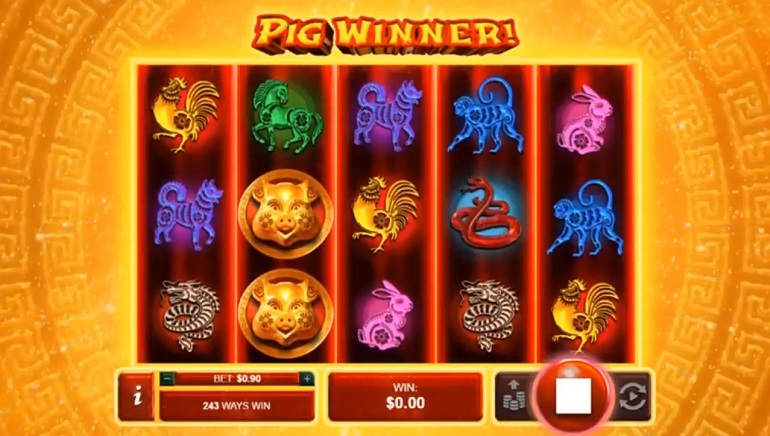 The Year of Pig starts in February 2019 and RTG casinos will celebrate the occasion by releasing the new Pig Winner slot.

The Chinese New Year began on 5 February 2019, with the iteration being ‘The Year of the Pig’. And this has not been lost on Realtime Gaming (RTG), a software developer and provider of slots, blackjack, roulette, tables, and more. As a result, this has led to the release of the Pig Winner slot at RTG casino sites.

Year of the Pig

There is a broad Chinese theme in place when it comes to the graphics. The pig also features heavily, but is joined by a variety of other animals from previous Chinese New Years. Among the other animals to feature as symbols are the rabbit, rooster, snake, dog, and monkey, alongside others.

Pig Winner is set to be playable on mobile devices and is comprised of five reels by three rows. Rather than include clearly laid out paylines, RTG has instead opted to give players 243 ways to win, with symbols capable of being matches in adjacent reels from left to right.

Ahead of the slot’s release, it is known that the wagering starts from a low point of €0.30, but players can raise that based on the values provided. When it comes to the jackpot, this can be up to 200x times the wager in place.

The pig is the main symbol and is also a wild with the power to substitute for base game symbols that are missing. For an added benefit, RTG has ensured that the pig adds a 2x multiplier when it forms a winning combination with other symbols.

The next most noticeable symbol, aside from the other animals, would be the yin and yang symbol, as this is used as the scatter. If three yin and yang scatters can be landed, then the player will receive eight free spins and boost the wild multiplier to 3x.