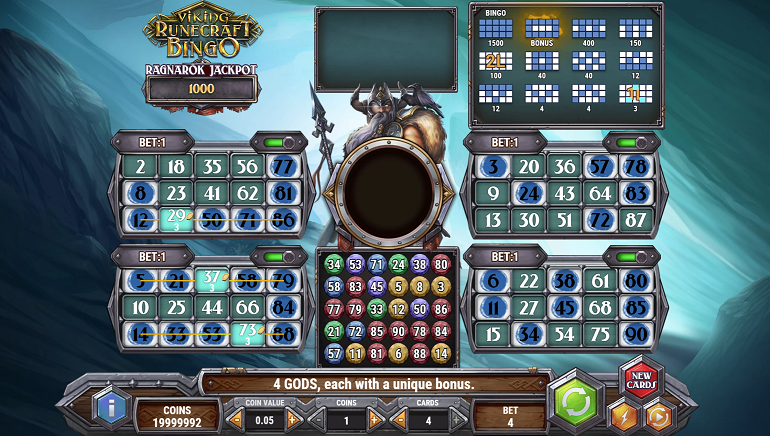 Play'n GO's Viking Runecraft Bingo features 90 balls and the option to play up to 4 bingo cards at once. Special features include the option to purchase extra balls, random prizes from 1 of 4 gods, a fixed prize, and a Ragnarok Jackpot.

Viking Runecraft is one of Play’n GO’s most popular mythology-themed slots, and now the Swedish developer has put a new twist on it by turning it into a bingo game. Viking Runecraft Bingo showcases player's favorite Norse gods like Thor, Odin, Freya, and more, but instead of spinning reels there’s a bingo spinner that produces numbered balls.

Viking Runecraft Bingo features 90 balls and the option to play up to 4 bingo cards at once. Each card contains 15 numbers between 1 and 90. 30 numbered balls are drawn in total, and if the drawn numbers appear on any of the player’s cards, they are marked off.

This game is rated 10/10 on the volatility scale and has an RTP of 95.87%. Only those who dare to rumble with the mighty Norse gods have the chance to win big!

If players choose to purchase extra balls, the famous Norse gods can randomly grant players a free extra ball during the extended gameplay.

But more exciting than the extra ball are the special features that the gods in this game can grant players. Thor, god of thunder, offers a bonus reel that players can spin and win 1 of 5 prizes. Odin, king of Asgard, offers players a choice between 2 mystery prizes. Freya, goddess of beauty, can grant players an instant mystery prize. And Heimdall, guardian of the gods’ stronghold, allows players to choose 2 out of 6 mystery prizes. One of the hidden prizes grants players all the prizes on the board.

Wheels and mystery prizes are great, but the Ragnarok Jackpot is the main attraction of Viking Runecraft Bingo. The jackpot is activated when players get bingo while all 4 cards are in play. When it kicks off, whichever god symbol is in play becomes the base symbol, along with an additional gold version. Players can pick hidden symbols from a board of 15. If they get 3 identical ones, they win the fixed prize, but if they pick 3 gold versions, they get the jackpot.