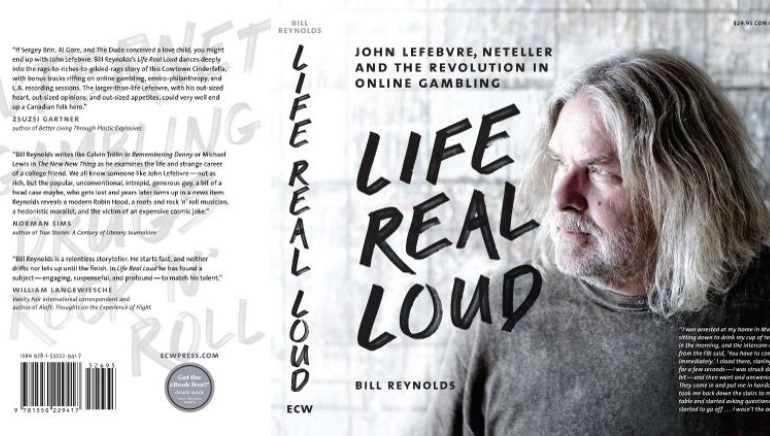 New biography about John Lefebvre, founder of NETELLER, has just been released. NETELLER is one of the world's largest companies that provides secure online payments, and is the payment method of choice for millions of players at online casinos.

NETELLER is one of the world's most relied-upon ways to make secure online payments, and is specifically popular in the online gambling sector. What many people don't know about NETELLER, however, is its colorful history; namely, its colorful founder, John Lefebvre. That's where Life Real Loud, a new biography by Bill Reynolds, comes in.

Life Real Loud documents the life of John Lefebvre, who some have compared to the hero of cult movie, The Big Lebowski: the Dude. Lefebvre launched NETELLER in 1999, and it started out as a small-time business in Calgary, Canada. Fortunately for Lefebvre, the turn of the century was just about the time that internet gambling also got its start, and many online casinos chose NETELLER as their online payment method.

With the rising popularity of NETELLER in the 2000s, Lefebvre moved from Calgary to a multi-million beach home in Malibu. With millions in the bank, he was able to practice his true love, music, which he continues to focus on until today.

Lefebvre's other calling card is that he smokes a lot of pot, and he has no plans to quit. In fact, he says that the only four words he wants on his epitaph are, “He never stopped tokin'.”

Trouble with the Law

It wasn't his marijuana habit that got Lefebvre in trouble with the law; it was NETELLER. In 2007, Lefebvre was arrested by the FBI on charges of money laundering and promoting illegal gambling. The unflappable Lefebvre cut a plea bargain and paid a hefty sum to the US government, but was still left with a nice fortune. With his remaining resources, Lefebvre has become one of Canada's biggest, yet unknown, philanthropists. Being unknown doesn't bother him though; in fact, it leaves him free to pursue his music, and to enjoy the millions that NETELLER continues to generate.

Playtech Founder May Be Back