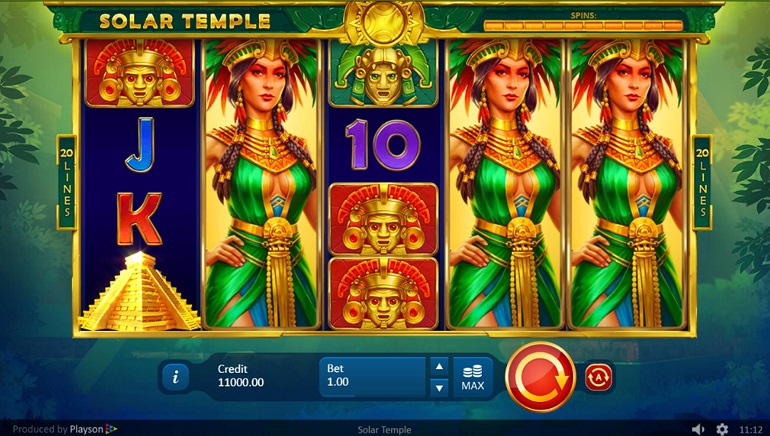 Solar Temple is a new slot machine from Playson, with an Aztec theme and features such as Flaming Frames that can fill the reels with wild symbols.

The latest slot from Playson is a shining example of games themed around Aztecs. Solar Temple is a 5-reel, 20-line game the acts as a sequel to the hugely popular Solar Queen.

With rich graphics and a cinematic soundtrack, the Solar Temple slots game is designed to look great across desktop and mobile platforms.

Light The Way To Solar Temple

Aztec masks, sculptures, pyramids, and the striking Queen all share the reels with lower-paying card symbols. A lush green jungle sits behind the game, but as temperatures soar, the scene turns to a fiery red.

The reels spin in cycles of 10 games, during which the blazing Sun symbol can appear. When it stops on the reels, it engulfs the position and surrounds it with fire. These Flaming Frames remain locked in place for any remaining spins in a series of 10.

If the Sun appears within an existing Flaming Frame, it increases a win multiplier by 1x. At the end of the cycle, all Flaming Frames transform into wild symbols and any new winning combinations are paid out. After this, the Flaming Frames are removed and players are ready to build them up again in the next sequence of 10 spins.

Any 3 or more pyramid symbols on reels 1, 3, and 5 at once lead to a free spins bonus round. The action of Solar Temple heats up even further, as all Sun symbols instantly transform into wilds that lock in place for the rest of the bonus round.

Players can spin the reels of the Solar Temple slot for as little as 0.20 or as much as 100.00. It's a medium to high variance game where returns come in at an average of 95.22%. It's available now at sites that feature the Playson range, where it joins the original Solar Queen slot and many others.