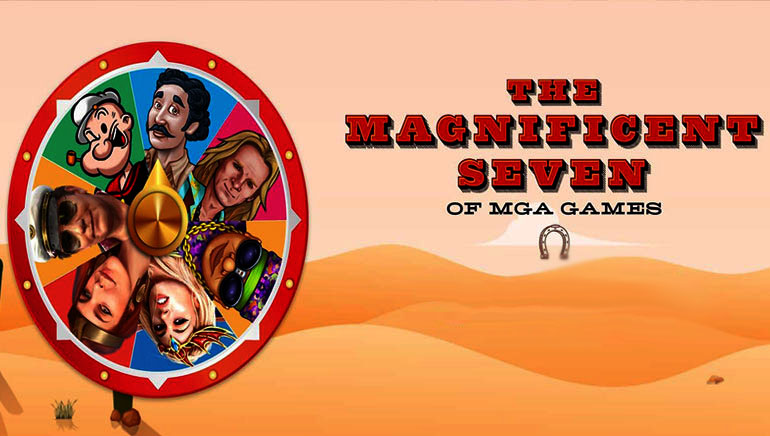 MGA Games expands its impressive portfolio of slots and table games, with the Spanish Celebrities series bringing famous people and characters into the spotlight.

MGA Games has an exciting portfolio of slots that is constantly growing with each new addition. The software developer is prolific in providing slots with original themes and outstanding visuals. Their most recent series goes by the name of Famous & Celebrities and takes slots to the next level. At the centre of these new games are famous actors, singers, and comic figures, as well as fictional characters. The idea of combining real figures and animation in slots, as well as live dealer games is original and helps them stand out from the crowd. These are some of the most recent and popular slots in their portfolio.

This fun slot with a high return to player is centred on Lieutenant Commander Steven Jack "Steve" McGarrett. The character is a former Navy seal who founded the task force Hawaii Five-0, which gives the name of the slot. Punters who like crime-fighting movies will surely appreciate this new slot from MGA games. With each spin of the real, they are one step closer to putting criminals behind bars, while being lavishly rewarded for their work. Set into the glamorous background of the Hawaii islands, the slot uses the latest technologies, with 6 action-packed mini-games that keep players at the edge of their seats.

Fonsi Nieto is a famous motorcycle racer, who now enjoys a lucrative career as an electronic music producer and DJ. The slot inspired by him is the latest in the portfolio of Spanish celebrities casino games and has a high RTP. Players who spin the reels will have the chance to trigger one of the three exclusive mini-games and enter the Grand Prix circuit. This is where some of the biggest prizes can be won and punters can hope to win a maximum of €55,000. To fully enjoy the Fonsi Nieto Deluxe Racing Life, the game uses original voiceover recordings from the racer himself.

King África is a well-known pop singer who made a name for himself with songs such as “La bomba”, “Paquito el chocolatero” and “El camaleón”. Whether you are a fan or not, the slot inspired by the Argentine celebrity is likely to appeal to you. That’s because it is built on solid fundamentals, with beautiful visuals and immersive sound effects. It has four exclusive mini-games and punters can win a maximum of €15,000 in this low volatility slot. The game appeals to those who love classic slots because it has only three reels and you can bet as little as $.20.

MGA Games has most of its celebrity-themed slots inspired by real people. However, one of the most exciting games in their collection is Popeye, cazatesoros and it is centred on the cartoon character. All the symbols populating the reels bring back fond memories of the cartoon, with spinach, pipe, tattoos, and Olivia just one click away. The game has three reels, with five mini-games and average volatility. Lucky punters can win as much as €15,000, while the betting limits range from €.20 to a maximum of €15.

TV series inspired by the deeds of drug cartels have enjoyed tremendous success in recent years. MGA Games has its fair share of slots inspired by this trending theme, but one stands out from the crowd. El Cartel is centred on Pablo Escobar and takes punters on a virtual trip to the call on the are ruled by the famous narcotraficante. Players are tasked with intercepting packages and closing deals and each such achievement is celebrated with iconic tunes and big wins. The game can be played on smartphones and tablets, as well as computers, with sensible stakes.

Table games fans and roulette enthusiasts, in particular, will surely enjoy the proposition made by MGA games. Roulette Grand Croupier El Dioni is a beautiful iteration of the popular game, with maximum bets of €2000 and top payouts of €28,800. This game stands out from the crowd because it focuses on one of the most famous security guards in Spanish history. In 1989, he fled with the van carrying the very money he was supposed to protect while in transit from one bank to the other. He evaded authorities for months and ran to Brazil, where he was finally caught but most of the money was not recovered.

Spanish fans of the famous performer, digital content creator, and artist will love this beautiful slot. Amarna Miller is the celebrity that brings Cleopatra to live in this beautiful slot available to mobile gamers. Defined by beautiful graphics, immersive sound effects, and working a unique theme, this slot is one of the best Egyptian-themed games available. There is more than meets the eye about it, with four mini-games, medium volatility, and maximum bets of €25. Players can win up to €14,765 while playing this five-reel slot.

Jose María Martínez-Bordíu is commonly referred to as Pocholo, one of the latest celebrities to feature in the slots developed by MGA games. Unpredictable, entertaining, and a bit crazy, the star of their latest instalment brings the slot to life. The game has three reels, five exclusive mini-games, and high-paying bonus games. The original voice-over is the best selling point, but it also helps that players can win up to €15,000. Casual punters can wager as little as €.20, while the maximum bet is €15, so Pocholo is a slot that should meet the expectations of beginners and veterans alike.

Daniela Blume is a fascinating person with an impressive and diverse career that includes everything from TV reporting to cities. Daniela also worked as a sexologist and was the host of a popular TV show, which made her even more popular. The slot inspired by her is a part of the Spanish Celebrities casino collection and goes by the name of Daniela Blume Golden Throne. It has five reels, maximum bets of €6, high volatility, and top winnings of €38,000. This brand-new game uses the Triple View design, ergonomic and adaptive buttons and it is fully compatible with mobile devices.