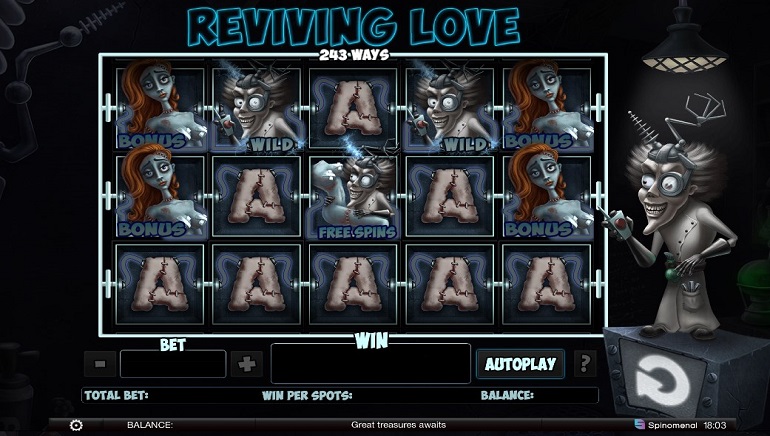 Spinomenal will be offering two new titles to their online casino partners in the form of the new Reviving Love slot as well as their own take on popular European roulette.

Spinomenal, a game developer with a portfolio of close to 100 slots based entirely on the new HTML5 technology, has introduced two new titles to their gaming offering. The first one is the Reviving Love slot, featuring dark but very elaborate graphics, while the second one is the company's own variation of always-popular European roulette.

With their Reviving Love slot, Spinomenal developers clearly decided to try a different approach, bringing us a game with dark but funny graphics and loads of entertaining features. Set in a weird and gloomy laboratory of sorts, reels of Reviving Love are filled with strange, cartoonish symbols, such as various organs (like hearts, brains, and eyes) carefully stored in jars for later use. Keeping you company on the side of the reels is the crazy scientist who runs the laboratory and adds to the atmosphere with his menacing laughter and antics.

Apart from gory graphics, this 243-ways to win slot also comes loaded with various features. There are random win multipliers and extra wilds that can appear on any spin without a previous warning or having to land any special combinations of symbols.

On top of this, Reviving Love also has two separate bonus features triggered by landing three Free Spins or three Bonus symbols anywhere on the reels. With the free spins bonus, players are awarded with 10 free spins and all wins are multiplied by 5. Furthermore, all winning combos during the round are held for a re-spin, with all new contributing symbols added to the existing combinations. Re-spins continue for as long as there are new symbols added to the existing combination.

The second bonus feature called Spark the Love will have you spinning the wheel in an attempt to bring your love back to life, with every new spin of the wheel awarding cash prizes.

European roulette is easily one of the most popular casino games, so it is no wonder that Spinomenal decided to launch their own variation of the game. The roulette plays according to traditional rules and there are no special twists you need to know about.

That said, Spinomenal European roulette does bring out fresh and crisp graphics alongside distinct and clear sound effects announcing winning numbers. There are also nice animations celebrating every winning spin.

Although there are numerous takes on European roulette already out there, the Spinomenal version should find its place at various online casinos, especially with the fans of the popular casino wheel, thanks to its nice looks and fast gameplay.

Players can expect to find both new games at online casinos powered by Spinomenal.