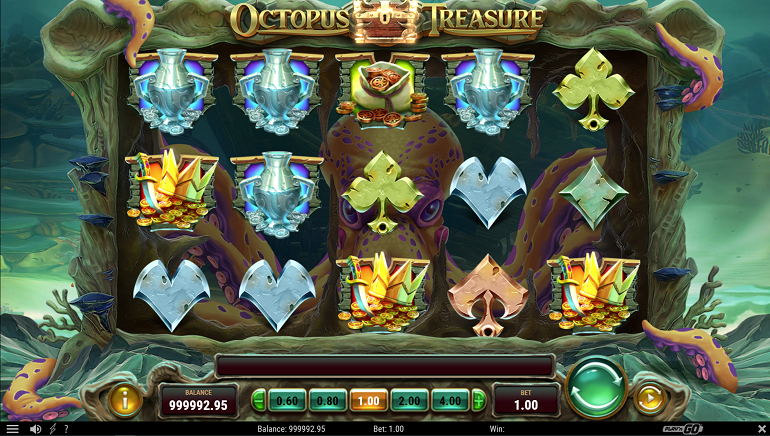 It’s not very often that you see an octopus as the star of a slot, but Play’n GO has shaken up the traditional under-the-sea theme with an octopus that actually helps players find the hidden treasure. The slot is bright and vivid, while the grid is wrapped by Octopus tentacles that have a hand in the game (pun intended). As for features, there are plenty, with wilds, scatters, 4 bonus features, respins, and free spins. Players can dive into Octopus Treasure at Play’n GO casinos, online and on mobile.

Octopus Treasure is a 5x3, 20-payline slot that’s playable on all devices. Bets range from $.20 to $100 and the default RTP is 96.25%. The slot is considered medium volatility, which means it’s a good option for players who don’t want to take on too much risk.

When the key scatter lands on reel 3, the octopus behind the reels reaches out and unlocks the treasure chest that sits atop the reels. The chest reveals 1 of 4 bonus features: Wild Coins, Gold Pile, Treasure Grab, or Wilds Reels.

In Wild Coins, players choose 3 coins to reveal symbols. These symbols are then upgraded to wilds and then the wins are calculated.

In Gold Pile, the octopus upgrades all high-paying symbols on the reels to the gold coins, the highest-paying symbol, before wins are paid out.

In Wild Reels, players choose from 5 clay pottery symbols, which turns one of the reels into a stacked wild.

When 3 pearl scatters land on reels 1, 3, and 5, the Respins feature is triggered. Players are awarded 3 respins during which only key scatters or blanks land on the reels. When a key scatter lands, it remains sticky for the duration of the respins. The number of keys will determine how many free spins the player gets. The free spins start immediately after the respins. After each free spin round, a key that was collected triggers one of the 4 bonus features.

Play’n GO’s Octopus Treasure is an easy-going slot that takes players on a happy-go-lucky treasure hunt. There’s not too much suspense or too much action, even with the 4 bonus features. The gameplay is light and fun, but may lack a certain depth that more experienced players look for in a game. The maximum win is 5000x the stake, not too massive for a buried treasure, but also perfectly on par with a medium volatility slot.