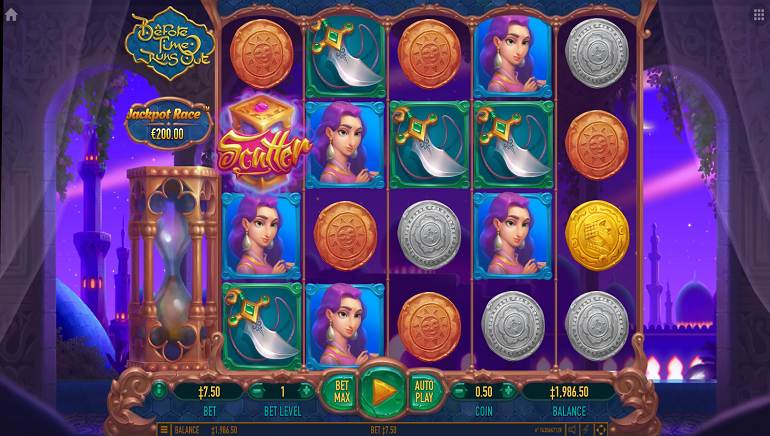 Players can help an Arabian prince to battle villains across the reels of new Before Time Runs Out online slot from Habanero.

Before Time Runs Out is an exciting new online slot from Habanero with an Arabian adventure theme. A prince, princess, and villain are among the symbols featured in this 5-reel, 40-line game where wins come from horizontal or vertical lines of matched symbols. Players can win up to 1,000,000x their line bet during a free spins bonus round.

The 5x4 symbol grid sits against a backdrop of an ancient Arabian city. Bronze, silver, and gold coins share the reels with the characters, along with a curved sword, jeweled wild, and lamp scatter symbols. An unusual payout mechanism rewards a prize whenever symbols match up across reels, or down a reel.

A special Duel feature starts when the prince and villain land on the reels a the same time. The symbols shuffle until they are adjacent, then the duel begins. The losing symbol is removed, and replaced by wild symbols.

Claim A Huge Win In The Free Games

Other features of the Before Time Runs Out slot machine include a coin respin bonus. The triggering coins lock in place as the reels respin, and players collect a prize based on whether bronze, silver, or gold coins appear more than the others.

Commenting on the release, Toni Karapetrov, Head of Corporate Communications at Habanero, said: “We are thrilled to launch Before Time Runs Out, a hectic Habanero adventure filled to the brim with enthralling features and world class mechanics, as well as inviting symbols and sounds.

“We’ve been racking up the wins in recent months, beginning the year with new accreditations, tier one operator partnerships and groundbreaking product rollouts. We can’t wait to maintain that momentum in the weeks and months to come.”