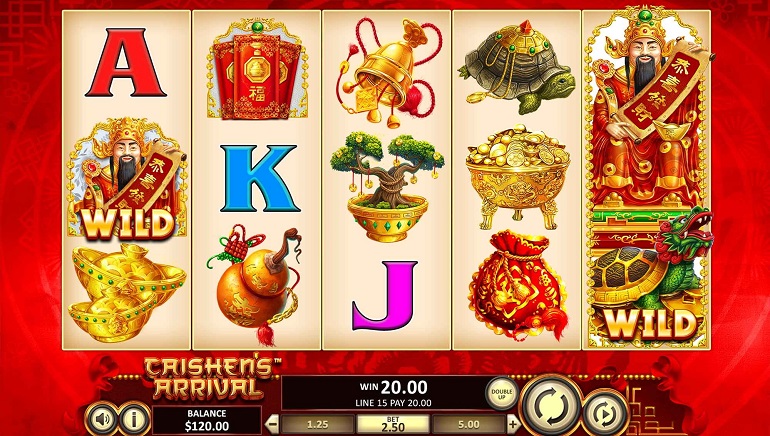 The Chinese god of wealth stars in the new Caishen’s Arrival slot from BetSoft, with a variety of multipliers integrated in the game.

Brand new Betsoft Gaming slot Caishen’s Arrival is based on the Chinese god of wealth. Fittingly, the slot game has been filled with golden bowls of coins, golden bells, and a wealth of ornate trinkets and heirlooms.

The mobile-compatible Caishen’s Arrival slot has been designed without the video elements found in other Betsoft slots, with the game’s appeal stemming from a 35,000x multiplier and a number of special features driven by wilds and scatters.

Wagering permits players to assign a low spin of only €0.05 per turn. Increments increase by €0.05 before later growing larger until reaching the maximum permitted bet of €5.00. As the total bet changes, so do the values of winnings shown alongside symbols in the paytable.

Playing cards are used as the low-value symbols, whereas the high-value ones are led by a turtle that can pay out winnings of €2,000 when five are matched on any of the 25 paylines. After winning, the option is available to play the Double Up Game. Players can stake all or half of their winnings on heads or tails in a coin toss mini-game.

In the paytable, it is explained that the Caishen wilds can substitute for any other symbol in the game, including scatters. Caishen carries another benefit if three of his portraits can be lined up on a single reel. When this happens, the god of wealth grants a fully wild reel and a complimentary re-spin.

Red Ticket symbols have been included for the purpose of awarding 10 free spins when these images are landed simultaneously on the first and fifth reels. The Coin Purse Scatter can also make a difference, but three or more images have to land anywhere on the screen. This could lead to a payout of up to €2,000 when five are obtained at the maximum stake.