Blueprint Gaming Nets a Winner with Licensing of D10S Maradona™ 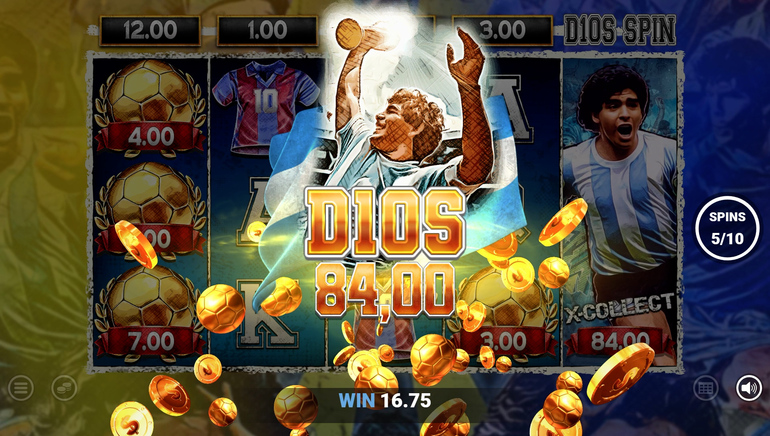 Iconic footballer Diego Maradona will be immortalized in the brand-new Blueprint Gaming title, D10S Maradona™ J.I.T. for the 2022 WORLD CUP!

Blueprint Gaming has consolidated its reputation as a top-rated online casino game developer for branded content after securing Diego Maradona, a highly-publicized licence. This prestigious license allows the renowned Argentinian footballer Diego Maradona to be the subject matter of a forthcoming slot machine game.

D10S Maradona™, a reference to the Spanish for Dios, a.k.a. G-d, and the number 10 jersey that the player wore throughout his career, is due to be released on Thursday, November 17, 2022. Blueprint Gaming is continuing its success with top-rated branded content. This football-themed online casino game will join several other popular releases like Ted™, the outrageously hysterical Rick & Morty™, and the world-famous game show Deal or No Deal™.

Diego Maradona, the legendary attacking midfielder, was a World Cup Champ with Argentina in 1986. His glittering career saw him score 259 goals, including one that was voted FIFA.com Goal of the Century in 2012. Such is the football superstardom that he routinely ranks among the crème de la crème of best-ever footballers, like the iconic Pele of Brazil.

He is widely considered one of the greatest players of all time, and his name has been a synonym for excellence in this universally popular sport. Blueprint Gaming will showcase images and symbols inspired by Maradona's 491-game football career. In addition, Blueprint's D10S Maradona™ will allow online casino operators to cross-sell at a significant price when the tournament begins in Qatar on November 20, 2022.

Maradona has been another great brand we've been entrusted. My confidence is high that our team of developers will again create a slot which treats this globally beloved icon with the greatest attention to detail. D10S Maradona™ will be launched before the biggest sporting event on the calendar. It is an incredible opportunity for operators and marketers to take advantage of global football fever. It's an exciting title that we are very excited about and one we are honoured to be able to work with.

Blueprint's reputation for curating games that stay true to its brand and keep its character is well-earned. We agreed to the partnership immediately and look forward with great anticipation to the game's launch featuring the greatest player ever and an Argentinian icon.

Blueprint Gaming, part of Germany's Gauselmann Group, is a UK-based online casino game studio. It was established in 2009. Blueprint Gaming has a track record of creating unique gaming products and boasts a glittering portfolio comprising more than 300 world-class games. This leading slot developer offers a wide range of games that include a variety of mechanics and themes. It also has innovative concepts and branded content, which is enjoyed by players all over the world.

Blueprint is authorized by the UKGC (United Kingdom Gambling Commission), the AGCC (Alderney Gambling Control Commission), the MGA (Malta Gaming Authority) and the GRA to develop and provide online games. As a result, Blueprint can now offer games that fans can play in the UK, Denmark, Lithuania, Romania, Spain, Portugal, Netherlands, Alderney, Malta, and Gibraltar-regulated markets.