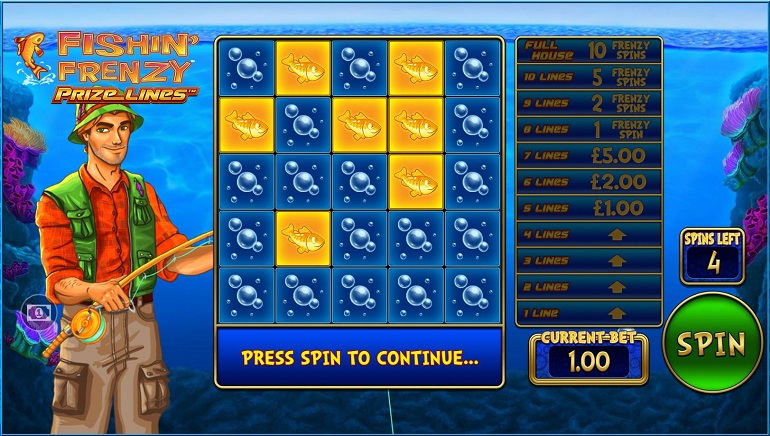 Online bingo and videos slots have been brought together in Fishin’ Frenzy Prize Lines™, which is a brand-new format of game from Blueprint Gaming.

UK-based software provider Blueprint Gaming Limited is known for developing several notable ranges of games within the industry, including Jackpot King, Megaways™, Deal or No Deal, and the Pub Fruit Series. Next up for advancement is the Prize Lines™ series, which is set for the release of the Fishin’ Frenzy Prize Lines™ slot.

The gaming interface of Fishin’ Frenzy Prize Lines is made with five reels and five rows of a slot machine while also having the appearance of a bingo scratch card. To develop the bingo side of the game, users are given a list of line-based options for their wagering. The various options and prices can be found on the right side of the screen, with the highest price being the full house.

Each round of the game will have five spins with the goal being to load the interface with the fish symbols and complete some of the prize lines. Blueprint has also included a “Hold Over” feature that can lock some of the symbols in place for a couple of spins.

In Fishin’ Frenzy Prize Lines, a user will have an option to keep the game going even after the round has been completed. There will be a choice for the user to simply finish the round and claim any winnings that have been generated, or else to pay for another turn.

Blueprint is developed a strong profile within the iGaming market, as evidenced by the providers securing official licenses to develop content based on popular franchises such as Rick and Morty, Top Cat, Deal or No Deal, and Ted.