Boogie on Down with the Disco Diamonds Slot from Play'n GO 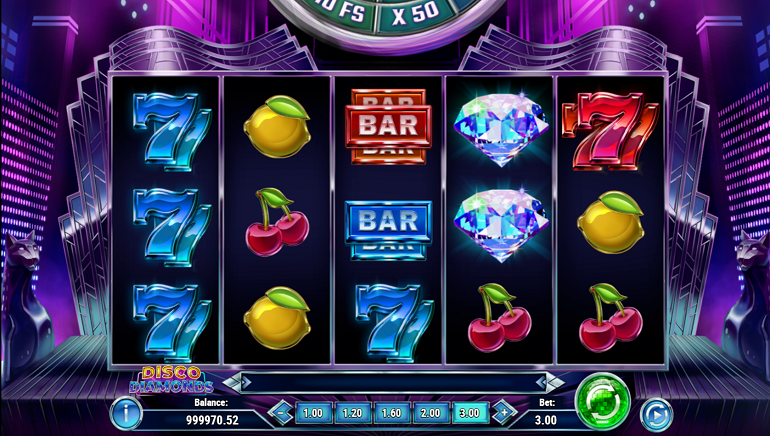 Play’n GO has gone disco for the release of Disco Diamonds, which counts Bonus Scatter Wheels and Wild Disco Balls among the special features.

The dawn of disco came to New York City in 1965 and has influenced the world right through until the present. One example is the brand-new Disco Diamonds slot that’s been developed by Play'n GO, which is the Malta-based software studio that was responsible for producing recent releases such as Helloween, Rabbit Hole Riches, Octopus Treasure, and Jolly Roger 2.

Disco Diamonds will feature a groovy soundtrack to complement the retro feel of the video slot. The symbols include lemons and cherries, as single, double, and triple versions of Bars and 7s. Plus, the slot can offer diamond symbols, Wild Disco Balls, and Bonus Scatter Wheels to trigger special features.

In the standard gameplay, the aim is to match symbols in adjacent reels than across strict paylines. The only requirement is that the chains begin from the first reel and that there are no breaks in the sequence. Rather than paylines, Disco Diamonds is a five-reel slot that can yield 243 pay-ways. To get started, this mobile-compatible slot covers a range of wagering from €0.10 up to €100.00 per spin, with the maximum depending on the player’s jurisdiction.

Wild Disco Balls have been included to complete pay-ways during play, but these can also trigger Disco Re-Spins. When at least one Wild Disco Ball lands, it one re-spin is provided. During the spin, any wilds on the screen will be locked for that turn. This feature can keep being triggered with each spin adding +1 to a collective multiplier.

In Disco Diamonds, the Bonus Wheel Scatter must be landed in unison on the first, third, and fifth reels to commence the second special feature. This entails a turn on a spinning wheel that can award free spins with sticky wilds or else an instant multiplier to boost a player’s wager by up to x7, x10, x25, or x50.